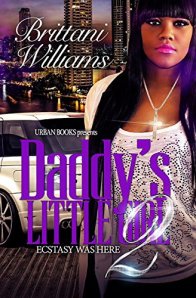 The sequel to Brittani Williams’ fan-favorite debut novel, Daddy’s Little Girl, is a fast-paced story where nothing is what it seems.

Elise “Ecstasy” Jones is the illegitimate daughter of drug kingpin Terrance Doran. She and her mother are well provided for, but Terrance must keep them a secret from his wife, his son, and his daughter Giselle. When Terrance is murdered, Elise and her mother are left penniless, forced to leave behind their lavish lifestyle. To fill that void, Elise quickly learns the true value of her gifts. She uses her beauty, body, and brains to achieve what she wants out of life.

Unfortunately for Elise, the lure of money always leads her down the wrong path, until a chance meeting lands her in the job of her dreams. Finally, she is able to make money without sexual favors, and her six-figure income, luxury car, and condo are well worth her troubled past. Being a professional dater is her occupation of choice, where hanging on the arm of single, wealthy men at business events and functions saves them from the scrutiny of their peers. Being paid to stroke egos is simple, until she dates one man who has a wife at home; then things quickly spiral out of control.

Elise soon finds herself the target of an enemy with a plan of attack. She searches for the only family she has left, her estranged half-sister Giselle, hoping for her help. Will she survive, or will she become a victim of her own mistakes? Either way, she’s determined to leave her mark, letting the world know that Ecstasy was here.