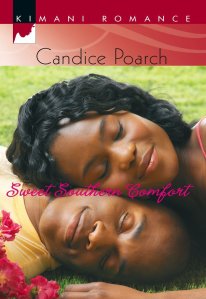 Melanie Lambert’s gorgeous backside was pointed in the air as she shoved books onto a shelf. Through a glass-plated door, Monroe Bedford got a clear view of black slacks molded to her butt. Her short aqua top revealed a sliver of smooth brown skin at her lower back.

His hand gripped the door handle and he bit down the rage burning a hole in his gut.

He’d rather climb the Himalayas than go in Melanie’s bookstore, and he hated heights. But his stubborn grandmother had insisted he remind Melanie to bring some books to the rehabilitation center where she was recovering from a stroke. Every time Monroe asked for the names of the books, she’d only say “Melanie knows.” From the moment he’d discovered Melanie was cheating his clueless grandmother, the very thought of her name set his back teeth on edge.

Swinging the door open, he crossed the threshold into the depths of what others might call a cheerful and inviting shop.

Melanie was standing in the section labeled Romance. His throat squeezed. When had that lead to anything but trouble? Women used their guile to paint an illusion, successfully drawing men like moths to their burning flames.

Melanie rose upright and her thick sable hair fell into place. With a welcoming smile, she glanced his way, her brown eyes meeting his. Before he could catch himself, her warmth tugged at him. Dull anger burned brighter in his brain and unwelcome fires of lust glowed in his veins. No wonder his grandmother was so easily conned.

Monroe nodded. “My grandmother said you’re holding books for her. She asked me to get them.”

“They’re behind the counter. How is she?”

“I was going to take the books to her this evening when I visited.”

“Her doctor is limiting visitors so she’ll have more time for therapy. How much?” he said tightly, wanting to get the heck out of there and away from her mesmerizing smile as quickly as he could.

Frowning, she placed the books in a colorful bag and added coordinating tissue paper. “They’re gifts.”

“I’ll pay for them.” He took a soft calfskin wallet out of his back pocket.

“No, no. They’re gifts from my daughter and me.”

“I insist.” His gaze touched hers and held. The Bedfords weren’t going to owe her one copper penny. “How much?” he asked again. He glared at her. The way she and the shopkeepers were cheating his grandmother bordered on the criminal.

With a questioning look, Melanie added up the cost of the books and gave him a total.

“Monroe, is anything wrong?” Melanie asked, clearly baffled. But Monroe wasn’t ready to reveal his findings. Not yet. “Is Mrs. Eudora okay?”

“She’s fine.” He quickly paid and left, well aware that her puzzled gaze followed him.

Melanie had talked his grandmother into building a small six-unit shopping plaza. Monroe’s architect sister had even designed the units. He’d thought it would be the perfect thing to give his grandmother something to occupy her time without overtaxing her. The woman was always into something, when at her age she should be resting.

He should have kept closer tabs on his grand-mother’s affairs, but with his own nightmarish year, he’d let many things slide. A few days ago she’d asked him to deposit the tenants’ checks into her bank account, and when he’d seen the piddling amount they paid for monthly rent, he was outraged.

Monroe opened the door to his car and slid onto the soft leather seat. On Monday he’d set up a meeting with her lawyer. One thing was for sure. This thievery wasn’t going to continue. If it was the last thing he did, he was going to convince her to sell every single retail unit before he left town.

Gazing down Main Street, Monroe twisted the key in the ignition. As soon as the car roared to life, he put it in gear and pointed it out of Summer Lake, South Carolina, and toward the rehabilitation center, a half hour drive away. * * *

An hour later, Melanie was still mystified over Monroe’s strange and unfriendly behavior when her cousin, Gail Carson, burst into the store. She had the same caramel complexion as Melanie, but stood an inch shorter.

“Did you hear what happened?” she asked, out of breath.

“The mayor has been telling everyone Monroe’s going to sell the shopping center.”

“What other shopping center is there in Summer Lake?”

“Mrs. Eudora can’t do anything from the sick bed, now can she? Monroe’s taken over. The mayor’s bragging about bringing in some interested buyers who plan to expand.”

“This makes no sense. Why would Monroe sell? Are you sure it’s not just a rumor? The mayor has been against this place from the get-go.”

Gail sliced through the air with a dismissive hand. “People with money can do anything they want. They don’t need a logical reason. Mama’s so worried, she’s having heart palpations.” Gail’s green skirt swirled around her legs as she paced back and forth. “I spent every dime I had for this place. Even mortgaged my house.”

Melanie balled her hands into fists to keep them from shaking. She’d sunk her last penny into Melanie’s Books & Treasures, too, but in a crisis somebody had to be the voice of reason. She could understand his selling if Mrs. Eudora wasn’t going to improve, but she was expected to make almost a full recovery. Besides, Melanie handled all the small shopping center’s problems.

“Don’t start predicting doom and gloom. I’m sure it’s not as bad as you think it is.”

They heard raised voices outside and started for the door. Melanie’s uncle, Milton Carson, and Elmore Hicks were arguing in front of the store for all the world to see. Elmore owned the store next door. The men still carried on a feud that should have died out decades ago. Melanie rushed outside.

“What’s wrong with you? You’re going to frighten the customers away.”

“It’s all his fault,” her uncle Milton said, pointing a finger at Elmore. Elmore shot a disgusted glare at Milton. Neither man paid any attention to Melanie. “Come inside my shop,” Melanie demanded. “I don’t have any customers right now.”

Both men glared at each other before they strode angrily into her store.

“Why are you fighting?” Melanie asked.

“It’s his fault,” Uncle Milton bellowed. “His dizzy niece couldn’t keep her skirt down and now we all have to pay.”

“Leave Monroe’s ex-wife out of this, Dad,” Gail said.

“You don’t know why he wants to sell,” Elmore said, enraged. “You got no right talking about my family like that.”

“None of us knows what’s going on right now,” Melanie reminded them. “So don’t start with the accusations. We have more important issues.”

“Like finding out exactly why he wants to sell and who wants to buy,” Gail said. “We have ten-year leases, so even if he sold, we have our spaces for that long.”

“Not exactly,” Melanie warned. “If Village Square is sold, the leases are terminated in ninety days unless the buyer chooses to continue them.”

“How could you agree to a lease like that, Melanie? We trusted you to work out a good deal with Mrs. Eudora.” Elmore growled. Half a foot shorter than Milton, he crossed his arms over his barrel chest. “I’ve put every penny I’ve got in this place.”

Uncle Milton slammed his fist on the counter-top. “Don’t you go blaming Melanie! Every time something goes wrong you blame her. You all but got down on your hands and knees begging her to talk Mrs. Eudora into renting you shop space. Shoulda known better than rent to a Hicks in the first place. It was right there in black and white. Didn’t you read your lease before you signed it?”

“Daddy, please don’t bring the feud into it.” Gail sent Melanie a here we go again glance, then picked up the fallen books. The feud of 1951 was like a religion with Elmore and Milton.

The Carsons believed Elmore’s father killed his wife–a Carson–back in 1951. There wasn’t enough evidence to arrest him and the families had been at each other’s throats ever since.

“We had to agree to the conditions of the lease because we’re all startup businesses. None of us have track records,” Melanie interjected.

“You’re just going to have to talk to Mrs. Eudora,” Uncle Milton said. “That’s all there is to it.”

“She isn’t well enough to handle business.” Nobody seemed to notice that Melanie was as worried as they were. She had a child to support. “Monroe told me the doctor restricted her visitors so I can’t get anywhere near her.” Melanie had never been so frustrated. Mrs. Eudora was improving, so she didn’t understand why Monroe wouldn’t let her visit the woman. She’d put so much energy and time into getting the shopping center built. Not to mention the fortune she’d spent on inventory for her store.

Click here to purchase.
© Reprinted by permission. All rights reserved.