The Work: My Search for a Life That Matters by: Wes Moore
The acclaimed author of The Other Wes Moore continues his inspirational quest for a meaningful life and shares the powerful lessons—about self-discovery, service, and risk-taking—that led him to a new definition of success for our times.

The Work is the story of how one young man traced a path through the world to find his life’s purpose. Wes Moore graduated from a difficult childhood in the Bronx and Baltimore to an adult life that would find him at some of the most critical moments in our recent history: as a combat officer in Afghanistan; a White House fellow in a time of wars abroad and disasters at home; and a Wall Street banker during the financial crisis. In this insightful book, Moore shares the lessons he learned from people he met along the way—from the brave Afghan translator who taught him to find his fight, to the resilient young students in Katrina-ravaged Mississippi who showed him the true meaning of grit, to his late grandfather, who taught him to find grace in service.

Moore also tells the stories of other twenty-first-century change-makers who’ve inspired him in his search, from Daniel Lubetzky, the founder of KIND, to Esther Benjamin, a Sri Lankan immigrant who rose to help lead the Peace Corps. What their lives—and his own misadventures and moments of illumination—reveal is that our truest work happens when we serve others, at the intersection between our gifts and our broken world. That’s where we find the work that lasts.

An intimate narrative about finding meaning in a volatile age, The Work will inspire readers to see how we can each find our own path to purpose and help create a better world. Release: 1/13/15

Jersey Lovers by:Armani Williams
Samantha Kerrington is the strikingly beautiful biracial daughter of one of America’s wealthiest black physicians and a white mother. She grew up in the lush green suburbs of Mendham, NJ in her parent’s sprawling mansion, holds a finance degree from Yale University, and has a six-figure job working for a financial company. Quincy Williams is a hard working restaurant cook who hails from East Orange, NJ. He’s tall, good looking, and a doting father to a precocious seven-year-old daughter who is the apple of his eye. In spite of Quincy and Samantha’s vast differences, they meet and the sparks fly. Dr. John Kerrington, Samantha’s rich black father has vowed to never marry a black woman because he thinks it will taint his image. His lonely wife Charlotte wants more from him but he pulls away. His secret black mistress, Vanessa desperately wants to become Mrs. John Kerrington and is willing to go all out to become just that. Armani Williams masterfully weaves together a story of love, scandal, and family in his third novel, “Jersey Lovers” via his very own Jerzee Boy Publications publishing imprint. Release: 1/13/15 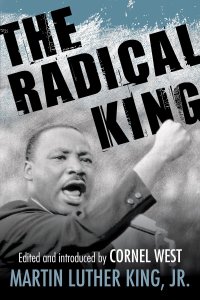 The Radical King by:Martin Luther King Jr. & Cornel West
A revealing collection that restores Dr. King as being every bit as radical as Malcolm X

“The radical King was a democratic socialist who sided with poor and working people in the class struggle taking place in capitalist societies. . . . The response of the radical King to our catastrophic moment can be put in one word: revolution—a revolution in our priorities, a reevaluation of our values, a reinvigoration of our public life, and a fundamental transformation of our way of thinking and living that promotes a transfer of power from oligarchs and plutocrats to everyday people and ordinary citizens. . . . Could it be that we know so little of the radical King because such courage defies our market-driven world?” —Cornel West, from the Introduction

Every year, Dr. Martin Luther King, Jr., is celebrated as one of the greatest orators in US history, an ambassador for nonviolence who became perhaps the most recognizable leader of the civil rights movement. But after more than forty years, few people appreciate how truly radical he was.

Arranged thematically in four parts, The Radical King includes twenty-three selections, curated and introduced by Dr. Cornel West, that illustrate King’s revolutionary vision, underscoring his identification with the poor, his unapologetic opposition to the Vietnam War, and his crusade against global imperialism. As West writes, “Although much of America did not know the radical King—and too few know today—the FBI and US government did. They called him ‘the most dangerous man in America.’ . . . This book unearths a radical King that we can no longer sanitize.” Release: 1/13/15 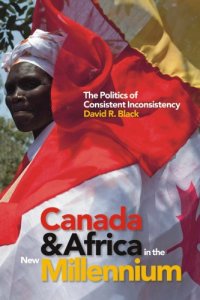 Canada and Africa in the New Millennium by:David R. Black
Canada’s engagement with post-independence Africa presents a puzzle. Although Canada is recognized for its activism where Africa is concerned, critics have long noted the contradictions that underlie Canadian involvement. Focusing on the period following 2000, and by juxtaposing Jean Chrétien’s G8 activism with the Harper government’s retreat from continental engagement, David R. Black’s Canada and Africa in the New Millennium illustrates a history of consistent inconsistency in Canada’s relationship with Africa. Black combines three interpretive frames to account for this record: the tradition of “good international citizenship”; Canada’s role as a benign face of Western hegemonic interests in Africa; and Africa’s role as the basis for a longstanding narrative concerning Canada’s ethical mission in the world. To examine Africa’s place in Canada’s foreign policy—and Canada’s place in Africa—Black focuses on G8 diplomacy, foreign aid, security assistance through peace operations and training, and the increasingly controversial impact of Canadian extractive companies. Offering an integrated account of Canada’s role in sub-Saharan Africa, Black provides a way of understanding the nature and resilience of recent shifts in Canadian policy. He underscores how Africa—though marginal to Canadian interests as traditionally conceived—has served as an important marker of Canada’s international role. Release: 1/13/15

Charlotte Richards didn’t get to be one of Hollywood’s top talent managers by dating her clients. When it comes to her career, her heart is not part of the contract—no matter how enticing the star.

From the moment she steps into Sean Maxwell’s fabulous home, though, the cool, professional persona she’s worked so hard to build threatens to melt in desire hotter than Sean’s sexy R&B lyrics.

Sean’s attraction to Charlotte is nothing new, at least not to him. He fell for her the moment he spotted her at a celebrity gala years ago. Now, with his old manager kicked to the curb, it’s the perfect time to bring her into his life.

The sparks between them blow Sean’s plan to take things slow right off the charts. And his determination to win her runs into overtime when the ghosts of his past threaten to destroy their one chance at love.

Warning: Contains a reformed playboy determined to do things right this time, and a career woman equally determined to keep her eyes off his sexy-as-sin body. Oh well, their intentions were honorable… Release:1/13/15

The first section of McFadden’s unconventional love story belongs to Campbell. Despite being born to a brokenhearted mother and a faithless father, Campbell still believes in the power of love…if she can ever find it. Living in the same neighborhood, but unknown to Campbell until a chance meeting brings them together, is Donovan, the “little man” of a shattered home–a family torn apart by anger and bitterness.

In the face of daunting obstacles, Donovan dreams of someday marrying, raising a family, and playing in the NBA. But deep inside, Campbell and Donovan live with the histories that have shaped their lives. What they discover–together and apart–forms the basis of this compelling, sensual, and surprising novel. Release: 1/12/15

The Lost Treasures of R&B (A D Hunter Mystery) by:Nelson George
Professional bodyguard D Hunter takes a gig protecting rapper Asya Roc at an underground fight club in poverty-stricken Brownsville, Brooklyn. Unknown to D, the rapper has arranged to purchase illegal guns at the event. An acquaintance of D from the streets (and from the novel The Plot Against Hip Hop) named Ice turns out to be the courier.

During the exchange a robbery is attempted. Ice is wounded. D gets Asya Roc to safety but is then chased by two gunmen because he has the bag containing the guns. This lethal chase ends under the elevated subway where D and the two gunmen run into a corrupt detective named Rivera. A bloody shootout ensues.

D, who has just moved back to Brooklyn after decades in Manhattan, finds himself involved in multiple mysteries. Who were the gunmen? Why were they after the guns? Who was being set up–Asya Roc or Ice? Meanwhile, he gets a much-needed paying assignment to track down the rarest soul music single ever recorded.

With gentrifying Brooklyn as the backdrop, D works to unravel various mysteries–both criminal and musical–while coming to terms with the failure of his security company and the ghosts of his childhood in “old Brooklyn.” Like its predecessors The Accidental Hunter and The Plot Against Hip Hop, The Lost Treasures of R&B uses pop music as the backdrop for a noir-flavored big-city tale. Release: 1/12/15

The Tyranny of the Meritocracy: Democratizing Higher Education in America by: Lani Guinier
A fresh and bold argument for revamping our standards of “merit” and a clear blueprint for creating collaborative education models that strengthen our democracy rather than privileging individual elites

Standing on the foundations of America’s promise of equal opportunity, our universities purport to serve as engines of social mobility and practitioners of democracy. But as acclaimed scholar and pioneering civil rights advocate Lani Guinier argues, the merit systems that dictate the admissions practices of these institutions are functioning to select and privilege elite individuals rather than create learning communities geared to advance democratic societies. Having studied and taught at schools such as Harvard University, Yale Law School, and the University of Pennsylvania Law School, Guinier has spent years examining the experiences of ethnic minorities and of women at the nation’s top institutions of higher education, and here she lays bare the practices that impede the stated missions of these schools.

Goaded on by a contemporary culture that establishes value through ranking and sorting, universities assess applicants using the vocabulary of private, highly individualized merit. As a result of private merit standards and ever-increasing tuitions, our colleges and universities increasingly are failing in their mission to provide educational opportunity and to prepare students for productive and engaged citizenship.

To reclaim higher education as a cornerstone of democracy, Guinier argues that institutions of higher learning must focus on admitting and educating a class of students who will be critical thinkers, active citizens, and publicly spirited leaders. Guinier presents a plan for considering “democratic merit,” a system that measures the success of higher education not by the personal qualities of the students who enter but by the work and service performed by the graduates who leave.

Guinier goes on to offer vivid examples of communities that have developed effective learning strategies based not on an individual’s “merit” but on the collaborative strength of a group, learning and working together, supporting members, and evolving into powerful collectives. Examples are taken from across the country and include a wide range of approaches, each innovative and effective. Guinier argues for reformation, not only of the very premises of admissions practices but of the shape of higher education itself. Release: 1/13/15