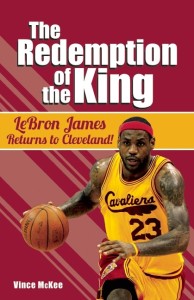 LeBron James is back in Cleveland’s court, and the city is on fire as its chosen one has decided to come home. His highly publicized, and equally highly emotional, return to Cleveland reveals his penultimate goal: to bring a championship back to northeast Ohio where he grew up.

Now, for the first time ever, the full story is told from the beginning as author Vince McKee covers James’s entire journey in every detail both on and off the court – from the start of his career with the Cavaliers in Cleveland to his departure to Miami, his time with the Heat, and finally, the much debated and highly anticipated return of the “King.”

Although pro basketball is an international juggernaut in terms of dollars, this story revolves more around hometown pride and character than money or celebrity.
Release:3/17/15
Click the cover to purchase.