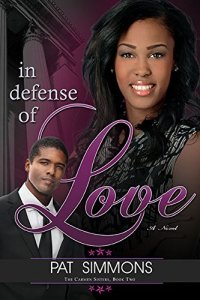 In Defense of Love (Carmen Sisters Book 2) by:Pat Simmons
Lately, nothing in Garrett Nash’s life has made sense. When two people close to the U.S. Marshal wrong him deeply, Garrett expects God to remove them from his life. Instead, the Lord relocates Garrett to another city to start over, as if he were the offender instead of the victim. Criminal attorney Shari Carmen is comfortable in her own skin most of the time. Being a “dark and lovely” African-American sister has its challenges, especially when it comes to relationships. Although she’s a fireball in the courtroom, she knows how to fade into the background and keep the proverbial spotlight off her personal life. But literal spotlights are a different matter altogether. While playing tenor saxophone at an anniversary party, she grabs the attention of Garrett Nash. And as God draws them closer together, He makes another request of Garrett, one to which it will prove far more difficult to say “Yes, Lord.”
Release: 3/2/15
Click the Cover to Purchase.

The Sellout: A Novel by: Paul Beatty
A biting satire about a young man’s isolated upbringing and the race trial that sends him to the Supreme Court.

Born in the “agrarian ghetto” of Dickens—on the southern outskirts of Los Angeles—the narrator of The Sellout resigns himself to the fate of lower-middle-class Californians: “I’d die in the same bedroom I’d grown up in, looking up at the cracks in the stucco ceiling that’ve been there since the ’68 quake.” Raised by a single father, a controversial sociologist, he spent his childhood as the subject in racially charged psychological studies. He is told that his father’s work will lead to a memoir that will solve their financial woes. But when his father is killed in a police shoot-out, he realizes there never was a memoir. All that’s left is the bill for a drive-thru funeral.

Fueled by this deceit and the general disrepair of his hometown, the narrator sets out to right another wrong: Dickens has literally been removed from the map to save California further embarrassment. Enlisting the help of the town’s most famous resident—the last surviving Little Rascal, Hominy Jenkins—he initiates the most outrageous action conceivable: reinstating slavery and segregating the local high school, which lands him in front of the Supreme Court.

Paul Beatty’s The Sellout showcases a comic genius at the top of his game. It challenges the sacred tenets of the U.S. Constitution, urban life, the civil rights movement, the father-son relationship, and the holy grail of racial equality—the black Chinese restaurant.
Release: 3/3/15
Click the Cover to Purchase.

The Color of Grace by:Bethany Haley Williams
A middle-class woman in rural America and war-affected children in Africa find common ground in their journeys from brokenness to redemption.

Author and psychologist Bethany Haley Williams shares how her own emotional healing led her into treacherous war zones, where she provides care to former child soldiers and young girls used as sex slaves.

Faced with her own battle with shame and a rocky journey toward healing, Bethany founded Exile International, a non-profit that implements art/expressive therapy and long-term, rehabilitative care to restore and empower war-affected children—including children rescued from Joseph Kony’s LRA (Lord’s Resistance Army).

One of those rescued young men, Solomon, was abducted at the age of ten after being forced to watch LRA soldiers maim and murder his father and grandfather. His younger siblings were left behind, and his mother was instructed to “raise them well…for one day we’ll return to take them too.” Solomon is one of hundreds of thousands of boys and girls who have had their innocence stolen and are forced to do the unthinkable on a daily basis. But their horrific experiences are just the beginning. The real story is what happens after.

Once these children learn to face their pasts, they are given hope for a future and a vision for changing the fabric of their countries by becoming leaders for peace and advocates of the power of forgiveness.
Release: 3/3/15
Click the Cover to Purchase. 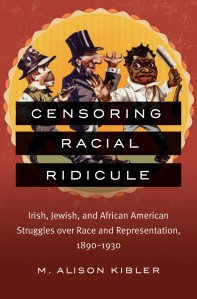 Censoring Racial Ridicule by:M. Alison Kibler
A drunken Irish maid slips and falls. A greedy Jewish pawnbroker lures his female employee into prostitution. An African American man leers at a white woman. These and other, similar images appeared widely on stages and screens across America during the early twentieth century. In this provocative study, M. Alison Kibler uncovers, for the first time, powerful and concurrent campaigns by Irish, Jewish and African Americans against racial ridicule in popular culture at the turn of the twentieth century. Censoring Racial Ridicule explores how Irish, Jewish, and African American groups of the era resisted harmful representations in popular culture by lobbying behind the scenes, boycotting particular acts, and staging theater riots. Kibler demonstrates that these groups’ tactics evolved and diverged over time, with some continuing to pursue street protest while others sought redress through new censorship laws.

Exploring the relationship between free expression, democracy, and equality in America, Kibler shows that the Irish, Jewish, and African American campaigns against racial ridicule are at the roots of contemporary debates over hate speech.
Release: 3/5/15
Click the Cover to Purchase.