Beyond Championships: A Playbook for Winning at Life by: Dru Joyce II
As the coach of one of high school basketball’s greatest programs, Coach Dru Joyce has been mentor and motivator to some of the nation’s best young players, including basketball legend LeBron James. Despite having virtually no experience in the sport, in less than ten years Dru went from a no-name fan to one of the highest profile basketball coaches in the country.

With insight and grit earned from his years on and off the court, Coach Dru shares for the first time the secrets to his teams’ success and his own coaching achievements. Far more than a sports book, Beyond Championships is a blueprint for anyone looking to make better choices, reach their full potential, and become winners in all areas of life.

As Dru outlines the nine principles that he promotes to his players and tries to live in his own life as well, you’ll discover that the solid foundation on which he built so many successful basketball programs can be applied to almost any situation. As you assess your chosen path in life and look for ways to embark on a more inspiring and rewarding journey, Coach Dru offers an accessible and relatable roadmap for personal evolution.
Release: 3/10/15
Click the Cover to Purchase.

The Secret Game: A Wartime Story of Courage, Change, and Basketball’s Lost Triumph by:Scott Ellsworth
The true story of the game that never should have happened.

Something was happening to basketball.

In the wartime fall of 1943, at the little-known North Carolina College for Negroes, Coach John McLendon was on the verge of changing the game forever. Within six months, his Eagles would become the highest scoring college basketball team in America, a fast-breaking, hard-pressing juggernaut that would shatter its opponents by as many as sixty points per game. The last student of James Naismith, basketball’s inventor, McLendon had opened the door to its future.

Across town, at Duke University, the best basketball squad on campus wasn’t the Blue Devils, but was an all-white military team from the Duke medical school. Comprised of former college stars from across the country, they dismantled every team they faced, including the Duke varsity. They were prepared to play anyone-that is, until an audacious invitation arrived, one that was years ahead of anything the South had ever seen before.

Based on years of research, The Secret Game is a story of courage and determination, and of an incredible, long-buried moment in the nation’s sporting past. The riveting true account of a remarkable season, it is the story of how handful of forgotten college basketball players not only changed the game forever, but also helped to usher in a new America.
Release: 3/10/15
Click the Cover to Purchase. 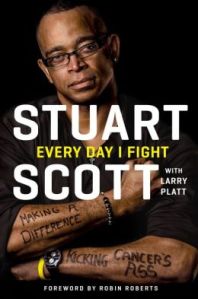 Every Day I Fight by:Stuart Scott, Larry Platt
“When you die, it does not mean that you lose to cancer. You beat cancer by how you live, why you live, and the manner in which you live.” – Stuart Scott

Shortly before he passed away, on January 4, 2015, Stuart Scott completed work on this memoir. It was both a labor of love and a love letter to life itself. Not only did Stuart relate his personal story—his childhood in North Carolina, his supportive family, his athletic escapades, his on-the-job training as a fledgling sportscaster, his being hired and eventual triumphs at ESPN—he shared his intimate struggles to keep his story going. Struck by appendiceal cancer in 2007, Stuart battled this rare disease with an unimaginable tenacity and vigor. Countless surgeries, enervating chemotherapies, endless shuttling from home to hospital to office and back—Stuart continued defying fate, pushing himself through exercises and workout routines that kept him strong. He wanted to be there for his teenage daughters, Sydni and Taelor, not simply as their dad, but as an immutable example of determination and courage.

Every Day I Fight is a saga of love, an inspiration to us all.
Release: 3/10/15
Click the Cover to Purchase.