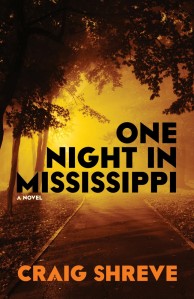 One Night in Mississippi by:Craig Shreve
After fifty years of guilt over his brother’s brutal murder in Civil Rights–era Mississippi, Warren Williams decides to renews his fight to bring the men responsible to justice. His efforts put him face -to- face with one of the murderers, Earl Olsen, in a remote Ontario town, where a contest of wits will end in death.

One Night in Mississippi is the story of a young activist named Graden Williams, who was brutally murdered in Mississippi during the sixties. After the perpetrators were charged but quickly released, Graden’s brother, Warren, drifted aimlessly for decades, estranged from the rest of his family and struggling with guilt over his brother’s death. But when the U.S. Justice Department begins re-opening cases like Graden’s more than forty years later, he dedicates himself to bringing Graden’s killers to justice.

A phoned-in tip after a television appearance leads Warren to a remote town in northern Ontario, where he meets Earl Olsen, the only murderer still at large, who turns out to be very different than what Warren had expected.
Release:3/24/15
Click the Cover to Purchase.

The Looting Machine: Warlords, Oligarchs, Corporations, Smugglers, and the Theft of Africa’s Wealth by:Tom Burgis
The trade in oil, gas, gems, metals and rare earth minerals wreaks havoc in Africa. During the years when Brazil, India, China and the other “emerging markets” have transformed their economies, Africa’s resource states remained tethered to the bottom of the industrial supply chain. While Africa accounts for about 30 per cent of the world’s reserves of hydrocarbons and minerals and 14 per cent of the world’s population, its share of global manufacturing stood in 2011 exactly where it stood in 2000: at 1 percent.

In his first book, The Looting Machine, Tom Burgis exposes the truth about the African development miracle: for the resource states, it’s a mirage. The oil, copper, diamonds, gold and coltan deposits attract a global network of traders, bankers, corporate extractors and investors who combine with venal political cabals to loot the states’ value. And the vagaries of resource-dependent economies could pitch Africa’s new middle class back into destitution just as quickly as they climbed out of it. The ground beneath their feet is as precarious as a Congolese mine shaft; their prosperity could spill away like crude from a busted pipeline.

This catastrophic social disintegration is not merely a continuation of Africa’s past as a colonial victim. The looting now is accelerating as never before. As global demand for Africa’s resources rises, a handful of Africans are becoming legitimately rich but the vast majority, like the continent as a whole, is being fleeced. Outsiders tend to think of Africa as a great drain of philanthropy. But look more closely at the resource industry and the relationship between Africa and the rest of the world looks rather different. In 2010, fuel and mineral exports from Africa were worth $333 billion, more than seven times the value of the aid that went in the opposite direction. But who received the money? For every Frenchwoman who dies in childbirth, 100 die in Niger alone, the former French colony whose uranium fuels France’s nuclear reactors. In petro-states like Angola three-quarters of government revenue comes from oil. The government is not funded by the people, and as result it is not beholden to them. A score of African countries whose economies depend on resources are rentier states; their people are largely serfs. The resource curse is not merely some unfortunate economic phenomenon, the product of an intangible force. What is happening in Africa’s resource states is systematic looting. Like its victims, its beneficiaries have names.
Release:3/24/15
Click the Cover to Purchase. 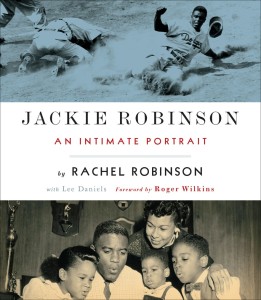 Jackie Robinson: An Intimate Memoir by:Rachel Robinson
In the spring of 1947, Jackie Robinson played his first game with the Brooklyn Dodgers, breaking down baseball’s decades-old color barrier and changing the face of the game forever. In this intimate portrait, Robinson’s widow, Rachel, tells her husband’s story—and that of her life with him—from her unique perspective, comple­mented by 301 black-and-white photographs from her own collection. Now back in print with a new jacket, this classic book is a moving tribute to a remarkable man seen through the eyes of an equally remarkable woman.
Release:3/25/15
Click the Cover to Purchase.