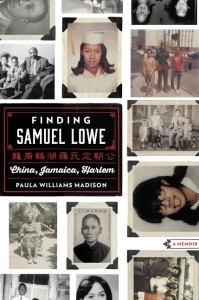 Finding Samuel Lowe by:Paula Williams Madison
This powerful debut tells the story of Paula Williams Madison’s Chinese grandfather, Samuel Lowe. He became romantically involved with a Jamaican woman, Paula’s grandmother, and they lived together modestly with their daughter in his Kingston dry goods store, Chiney Shop. In 1920 his Chinese soon-to-be wife arrived to set up a “proper” family. When he requested to take his three-year-old daughter with him, Paula’s jealous grandmother made sure that Lowe never saw his child again. That began an almost one-hundred-year break in their family.

Years later, the arrival of her only grandchild raising questions about family and legacy, Paula decided to search for Samuel Lowe’s descendants in China. With the support of her brothers and the help of encouraging strangers, a determined Paula eventually pieced together her grandfather’s life, following his story from China to Jamaica and back.

Her amazing search is vividly rendered. Paula has produced an emotional memoir that travels from Toronto to Jamaica to China. Using old documents, digital records, and referrals from the insular and interrelated Chinese-Jamaican community, she found three hundred long-lost relatives in Shenzhen and Guangzhou, China. She even located documented family lineage that traces back three thousand years to 1006 BC. Her wonderfully warm elders, all born in Jamaica and raised in China, shared the history and accomplishments of the Lowes in the East and the West, as well as the hardships and persecution suffered by her capitalist grandfather during the Communist era and the Cultural Revolution.

Finding Samuel Lowe is a remarkable journey about one woman’s path to self-discovery. It is a story about love and devotion that transcends time and race, and a beautiful reflection of the power of family and the interconnectedness of our world.
Release:4/14/15
Click the Cover to purchase. 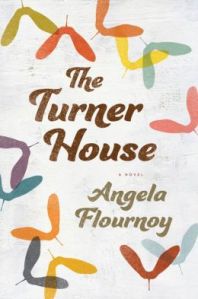 The Turner House by:Angela Flournoy
A powerful, timely debut, The Turner House marks a major new contribution to the story of the American family.
The Turners have lived on Yarrow Street for over fifty years. Their house has seen thirteen children grown and gone—and some returned; it has seen the arrival of grandchildren, the fall of Detroit’s East Side, and the loss of a father. The house still stands despite abandoned lots, an embattled city, and the inevitable shift outward to the suburbs. But now, as ailing matriarch Viola finds herself forced to leave her home and move in with her eldest son, the family discovers that the house is worth just a tenth of its mortgage. The Turner children are called home to decide its fate and to reckon with how each of their pasts haunts—and shapes—their family’s future.

Already praised by Ayana Mathis as “utterly moving” and “un-putdownable,” The Turner House brings us a colorful, complicated brood full of love and pride, sacrifice and unlikely inheritances. It’s a striking examination of the price we pay for our dreams and futures, and the ways in which our families bring us home.
Release:4/14/15
Click the Cover to purchase. 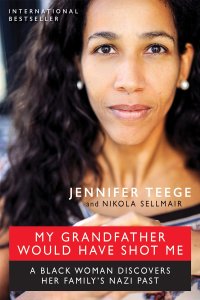 My Grandfather Would Have Shot Me: A Black Woman Discovers Her Family’s Nazi Past by:Jennifer Teege
When Jennifer Teege, a German-Nigerian woman, happened to pluck a library book from the shelf, she had no idea that her life would be irrevocably altered. Recognizing photos of her mother and grandmother in the book, she discovers a horrifying fact: Her grandfather was Amon Goeth, the vicious Nazi commandant chillingly depicted by Ralph Fiennes in Schindler’s List—a man known and reviled the world over.

Although raised in an orphanage and eventually adopted, Teege had some contact with her biological mother and grandmother as a child. Yet neither revealed that Teege’s grandfather was the Nazi “butcher of Plaszów,” executed for crimes against humanity in 1946. The more Teege reads about Amon Goeth, the more certain she becomes: If her grandfather had met her—a black woman—he would have killed her.

Teege’s discovery sends her, at age 38, into a severe depression—and on a quest to unearth and fully comprehend her family’s haunted history. Her research takes her to Krakow—to the sites of the Jewish ghetto her grandfather “cleared” in 1943 and the Plaszów concentration camp he then commanded—and back to Israel, where she herself once attended college, learned fluent Hebrew, and formed lasting friendships. Teege struggles to reconnect with her estranged mother Monika, and to accept that her beloved grandmother once lived in luxury as Amon Goeth’s mistress at Plaszów.

Teege’s story is cowritten by award-winning journalist Nikola Sellmair, who also contributes a second, interwoven narrative that draws on original interviews with Teege’s family and friends and adds historical context. Ultimately, Teege’s resolute search for the truth leads her, step by step, to the possibility of her own liberation.
Release:4/14/15
Click the Cover to purchase. 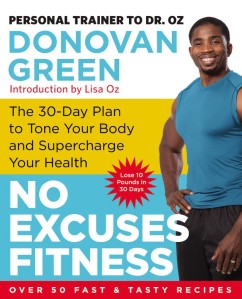 Between his positive, can-do spirit and practical, brass tacks strategies for getting in shape, it’s no wonder that Donovan Green has reached 3.7 million daily viewers via his unique No Excuses platform on DrOz.com. With No Excuses Fitness, Green delivers a comprehensive month-long plan designed to help readers lose 10 pounds in 30 days. Filled with healthy recipes, workouts that can be done anywhere and with minimal equipment, and daily tips for staying focused (especially through plateaus), and featuring a foreword by Dr. Oz’s wife Lisa, No Excuses Fitness will inspire and guide anyone interested in losing weight and gaining optimal health.
Release:4/14/15
Click the Cover to purchase. 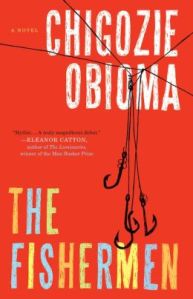 The Fishermen: A Novel by:Chigozie Obioma
In a Nigerian town in the mid 1990’s, four brothers encounter a madman whose mystic prophecy of violence threatens the core of their close-knit family.
Told from the point of view of nine year old Benjamin, the youngest of four brothers, THE FISHERMEN is the Cain and Abel-esque story of an unforgettable childhood in 1990’s Nigeria, in the small town of Akure. When their strict father has to travel to a distant city for work, the brothers take advantage of his extended absence to skip school and go fishing. At the ominous, forbidden nearby river, they meet a dangerous local madman who persuades the oldest of the boys that he is destined to be killed by one of his siblings.

What happens next is an almost mythic event whose impact-both tragic and redemptive-will transcend the lives and imaginations of its characters and its readers. Dazzling and viscerally powerful, The Fishermen never leaves Akure but the story it tells has enormous universal appeal. Seen through the prism of one family’s destiny, this is an essential novel about Africa with all of its contradictions-economic, political, and religious-and the epic beauty of its own culture.

With this bold debut, Chigozie Obioma emerges as one of the most original new voices of modern African literature, echoing its older generation’s masterful storytelling with a contemporary fearlessness and purpose.
Release:4/14/15
Click the Cover to purchase. 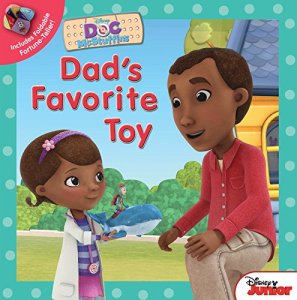 Doc McStuffins Dad’s Favorite Toy
While cleaning the attic, Dad, Doc, and Donny find Dad’s favorite childhood toy, Saltwater Serge and Wellington Whale. They test it out, but the button breaks! It’s up to Doc to fix this beloved childhood toy for her dad in this storybook that includes a foldable paper fortune teller toy for even more Doc McStuffins fun!
Release:4/14/15
Click the Cover to purchase. 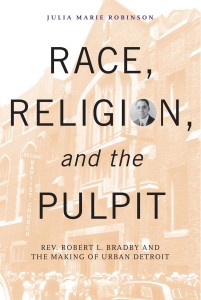 Race, Religion, and the Pulpit by:Julia Marie Robinson
During the Great Migration of African Americans from the South to the cities of the Northeast, Midwest, and West, the local black church was essential in the making and reshaping of urban areas. In Detroit, there was one church and one minister in particular that demonstrated this power of the pulpit—Second Baptist Church of Detroit (“Second,” as many members called it) and its nineteenth pastor, the Reverend Robert L. Bradby. In Race, Religion, and the Pulpit: Rev. Robert L. Bradby and the Making of Urban Detroit, author Julia Marie Robinson explores how Bradby’s church became the catalyst for economic empowerment, community building, and the formation of an urban African American working class in Detroit.

Robinson begins by examining Reverend Bradby’s formative years in Ontario, Canada; his rise to prominence as a pastor and community leader at Second Baptist in Detroit; and the sociohistorical context of his work in the early years of the Great Migration. She goes on to investigate the sometimes surprising nature of relationships between Second Baptist, its members, and prominent white elites in Detroit, including Bradby’s close relationship to Ford Motor Company and Henry Ford. Finally, Robinson details Bradby’s efforts as a “race leader” and activist, roles that were tied directly to his theology. She looks at the parts the minister played in such high-profile events as the organizing of Detroit’s NAACP chapter, the Ossian Sweet trial of the mid-1920s, the Scottsboro Boys trials in the 1930s, and the controversial rise of the United Auto Workers in Detroit in the 1940s.

Race, Religion, and the Pulpit presents a full and nuanced picture of Bradby’s life that has so far been missing from the scholarly record. Readers interested in the intersections of race and religion in American history, as well as anyone with ties to Detroit’s Second Baptist Church, will appreciate this thorough volume.
Release:4/15/15
Click the Cover to purchase.

Dreaming Out Loud by:Horace Porter
Dreaming Out Loud brings together essays by many of the most well-known and respected African American writers of the twentieth and twenty-first centuries, discussing various aspects of the vocation, craft, and art of writing fiction. Though many of the writers included here are also accomplished poets, essayists, and playwrights, this collection and the essays it contains remains focused on the novel as a genre and an art form.

Some essays explore the challenges of being an African American writer in the United States, broadly addressing aesthetic and racial prejudice in American publishing and literature and its changing face over the decades. Others are more specific and personal, recounting how the authors came to be a reader and writer in a culture that did not always encourage them to do so. Some are more general and focus on practice and craft, while still other essays offer detailed behind-the-scenes accounts of how famous novels, such as Native Son, Invisible Man, The Autobiography of Miss Jane Pittman, and The Color Purple, came to life. Ranging from the Harlem Renaissance, through the Civil Rights movement, and into the twenty-first century, this anthology explores what it has meant to be an African American novelist over the past hundred years.

I Will Always Write Back : How One Letter Changed Two Lives by:Martin Ganda, Caitlin Alifirenka, Liz Welch
The inspiring story of a 12-year-old American girl and a boy from Zimbabwe who change each other’s lives when her letter for her class’s pen-pal project finds its way to him.

The true story of an all-American girl and a boy from Zimbabwe and the letter that changed both of their lives forever.

It started as an assignment. Everyone in Caitlin’s class wrote to an unknown student somewhere in a distant place.

Martin was lucky to even receive a pen-pal letter. There were only ten letters, and forty kids in his class. But he was the top student, so he got the first one.

That letter was the beginning of a correspondence that spanned six years and changed two lives.

In this compelling dual memoir, Caitlin and Martin recount how they became best friends –and better people–through their long-distance exchange. Their story will inspire you to look beyond your own life and wonder about the world at large and your place in it.
Release:4/14/15
Click the Cover to Purchase.