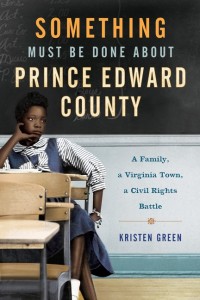 Combining hard-hitting investigative journalism and a sweeping family narrative, this provocative true story reveals a little-known chapter of American history: the period after the Brown v. Board of Education decision when one Virginia school system refused to integrate

In the wake of the Supreme Court’s unanimous decision in the case of Brown v. Board of Education, Virginia’s Prince Edward County refused to obey the law. Rather than desegregate, the county closed its public schools, locking and chaining the doors. The community’s white leaders quickly established a private academy, commandeering supplies from the shuttered public schools to use for their all-white classrooms, while black parents scrambled to find alternative education for their children. For five years, the schools remained closed in Prince Edward County.

Kristen Green grew up in Farmville and attended Prince Edward Academy, which didn’t open its doors to black students until 1986. Thirty four years after the Supreme Court ended school segregation, Green first began to learn the truth about her hometown’s shameful history. As she peels back the layers of this haunting period in our nation’s past, her own family’s role—no less complex and painful—comes to light.

At once gripping, enlightening, and deeply moving, Something Must Be Done About Prince Edward County is a dramatic chronicle that explores our troubled racial past and its reverberations today, and a timeless story about compassion, forgiveness, and the meaning of home.
Release: 6/9/15
Click the Cover to purchase.