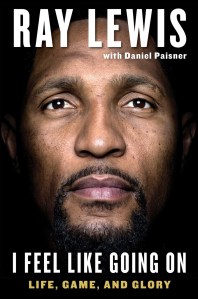 In this searing memoir, Ray Lewis—legendary Baltimore Ravens linebacker and one of the greatest defensive players of his generation—opens up about the state of football as well as his troubled childhood, his rise to athletic greatness, and the accusations that threatened to ruin his NFL career.

Ray Lewis’s storied seventeen-year career and two Super Bowl wins have earned him a place among the greats who have played the game. In his memoir, he brings us right onto the field to see the action from a player’s point of view. But he also has much to say about his struggles off the field, including his father abandoning him as a child, his best friend’s murder, and his own wrongful incarceration that threatened to cut short his football career. But, as Lewis will attest, these heartbreaks helped lead him to renew his faith and on to become MVP when the Ravens won the Super Bowl in 2000, eventually taking him to a second Super Bowl title in his final season.

Newly retired, Lewis reveals his controversial opinions on the business of football and offers insights about the torturous aspects of the sport that you don’t see on television. From a rookie player accused of murder to arguably the best defensive player in the history of the NFL, Lewis’s story is one of triumph and tragedy, tenacity and strength.

Now a devoted father of six, Lewis attributes his athletic and personal success to his strong faith and unwavering trust in God. More than just an incredible rise to glory, Lewis’s story provides an honest and nuanced look at the most popular sport in America from one of football’s most respected players.
Release: 10/20/15
Click the Cover to Purchase.