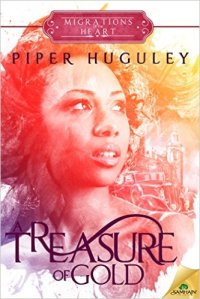 A Treasure of Gold (Migrations of the Heart) by:Piper Huguley
When you follow your heart, never count the cost.

Migrations of the Heart, Book 3

Trusting in the One who orders her steps, Nettie Bledsoe is determined not to deviate from her route to the charity kitchen. Don’t stop for anything, her sisters say. Pittsburgh isn’t like Georgia, they warn.

Yet when low moans of unholy suffering drift from an alley, she can’t help but investigate. It’s a man. The most beautiful man she’s ever seen. Despite his scandalous reputation, something within her responds to his sinfully rich voice.

Jay Evans is trying hard to stay on the straight and narrow, and doesn’t want help from any church do-gooder. But until his wound heals, he needs help caring for his young daughter, Goldie. Especially since Nettie saw fit to fire Goldie’s barely competent nanny.

Despite their mismatched backgrounds, Nettie and Jay fight a losing battle against their growing attraction. But it’s only when Nettie is kidnapped that Jay realizes that if he doesn’t get her back safe and sound, his heart will shatter into uncountable pieces.
Release: 11/10/15
Click to purchase: (Kindle) or (Paperback)

Dirty Heat by:Cairo
Six steamy tales of deceit in the sheets that delve into the scandalous world of infidelity, where there is no end to sexual imagination and forbidden lust.

Every cheater has a hidden desire. Some love it dirty. Others love it hot. From one-night stands to weekend flings to lustful online affairs, Dirty Heat serves up six naughty tales of deceit in the sheets—featuring men and women who cheat.

In “P-Spot Under Siege”: Kendall Evans has a fetish he isn’t comfortable sharing with his wife. So he seeks out women willing to indulge his deep, darkest secret.

In “All Three Holes”: Buxom beauty Lolita Singleton is comfortable in the skin she’s in. But her boyfriend of five years can’t seem to ride her curves or handle the heat. So what’s a girl to do? Simple. She has a weekend rendezvous with three hunks that can.

In “Legs Wide Open”: Markisha Swift throws caution to the wind, and is swept up in an office romance.

In “Dick for Hire”: Desperate times often call for desperate measures. And thirty-one-year-old Levar Green quickly finds himself sucked into a world of online ads and taboo sex, slinging wood to pay the bills.
Release: 11/10/15
Click Version to purchase: (Kindle) or (Paperback)

A Moment of Silence: Midnight III (The Midnight Series Book 3) by Sister Souljah
In her next heart-pounding novel of passion, danger, temptation, and adventure, New York Times bestselling author Sister Souljah returns to the story of Midnight.

Handsome, young, Muslim, and married to two women living in one house along with his mother, Umma, and sister, Naja: can Midnight manage? He is surrounded by Americans who don’t share or understand his faith or culture, and adults who are offended by his maturity, intelligence, or his natural ability to make his hard work turn into real money. He is calm, confident, and cool, Ninja-trained and powerful, but one moment of rage throws this Brooklyn youth into a dark world of dirty police, gangs, guns, drugs, prisons, and prisoners. Everything he ever believed, every dollar he ever earned, and all of the women he ever loved—including his mother—are at risk.

Will his manhood be taken, broken, or altered? Can he maintain his faith among the heathens? Outnumbered, overruled, and deeply envied—how can he possibly survive? Will the streets convert him? What can he keep? What must he lose?

In this heart-pounding adventure, thriller, and intense narrative, New York Times bestselling author Sister Souljah has penned her most passionate and engrossing novel to date. Raw and uncompromising, her storytelling highlights and ignites the ongoing struggle of young men worldwide, to more than survive, but to live strong, to earn, to have the right to love and protect their families, to receive justice, and to be free.
Release: 11/10/15
Click Version to purchase: (Kindle) or (Hardcover)

Year of Yes: How to Dance It Out, Stand In the Sun and Be Your Own Person by:Shonda Rhimes
In this poignant, hilarious, and deeply intimate call to arms, Hollywood’s most powerful woman, the mega-talented creator of Grey’s Anatomy and Scandal and executive producer of How to Get Away with Murder reveals how saying YES changed her life—and how it can change yours too.

She’s the creator and producer of some of the most groundbreaking and audacious shows on television today: Grey’s Anatomy, Scandal, How to Get Away with Murder. Her iconic characters—Meredith Grey, Cristina Yang, Olivia Pope, Annalise Keating—live boldly and speak their minds. So who would suspect that Shonda Rhimes, the mega talent who owns Thursday night television (#TGIT), is an introvert? That she hired a publicist so she could avoid public appearances? That she hugged walls at splashy parties and suffered panic attacks before media interviews so severe she remembered nothing afterward?

Before her Year of Yes, Shonda Rhimes was an expert at declining invitations others would leap to accept. With three children at home and three hit television shows on TV, it was easy to say that she was simply too busy. But in truth, she was also afraid. Afraid of cocktail party faux pas like chucking a chicken bone across a room; petrified of live television appearances where Shonda Rhimes could trip and fall and bleed out right there in front of a live studio audience; terrified of the difficult conversations that came so easily to her characters on-screen. In the before, Shonda’s introvert life revolved around burying herself in work, snuggling her children, and comforting herself with food.

And then, on Thanksgiving 2013, Shonda’s sister muttered something that was both a wake up and a call to arms: You never say yes to anything.

The comment sat like a grenade, until it detonated. Then Shonda, the youngest of six children from a supremely competitive family, knew she had to embrace the challenge: for one year, she would say YES to everything that scared her.

This poignant, intimate, and hilarious memoir explores Shonda’s life before her Year of Yes—from her nerdy, book-loving childhood creating imaginary friends to her devotion to creating television characters who reflected the world she saw around her (like Cristina Yang, whose ultimate goal wasn’t marriage, and Cyrus Beene, who is a Republican and gay). And it chronicles her life after her Year of Yes had begun—when Shonda forced herself out of the house and onto the stage, appearing on Jimmy Kimmel Live, and giving the Dartmouth Commencement speech; when she learned to say yes to her health, yes to play and she stepped out of the shadows and into the sun; when she learned to explore, empower, applaud, and love her truest self. Yes.

This wildly candid and compulsively readable book reveals how the mega talented Shonda Rhimes, an unexpected introvert, achieved badassery worthy of a Shondaland character. And how you can, too.
Release: 11/10/15
Click to purchase: (Kindle) or (Hardcover)

Alex Haley: And the Books That Changed a Nation by:Robert J. Norrell
It is difficult to think of two twentieth century books by one author that have had as much influence on American culture when they were published as Alex Haley’s monumental bestsellers, The Autobiography of Malcolm X (1965), and Roots (1976). They changed the way white and black America viewed each other and the country’s history. This first biography of Haley follows him from his childhood in relative privilege in deeply segregated small town Tennessee to fame and fortune in high powered New York City. It was in the Navy, that Haley discovered himself as a writer, which eventually led his rise as a star journalist in the heyday of magazine personality profiles. At Playboy Magazine, Haley profiled everyone from Martin Luther King and Miles Davis to Johnny Carson and Malcolm X, leading to their collaboration on The Autobiography of Malcolm X. Roots was for Haley a deeper, more personal reach. The subsequent book and miniseries ignited an ongoing craze for family history, and made Haley one of the most famous writers in the country. Roots sold half a million copies in the first two months of publication, and the original television miniseries was viewed by 130 million people.

Haley died in 1992. This deeply researched and compelling book by Robert J. Norrell offers the perfect opportunity to revisit his authorship, his career as one of the first African American star journalists, as well as an especially dramatic time of change in American history.
Release: 11/10/15
Click Version to purchase: (Kindle) or (Hardcover)

Religious Affects: Animality, Evolution, and Power by:Donovan O. Schaefer
In Religious Affects Donovan O. Schaefer challenges the notion that religion is inextricably linked to language and belief, proposing instead that it is primarily driven by affects. Drawing on affect theory, evolutionary biology, and poststructuralist theory, Schaefer builds on the recent materialist shift in religious studies to relocate religious practices in the affective realm—an insight that helps us better understand how religion is lived in conjunction with systems of power. To demonstrate religion’s animality and how it works affectively, Schaefer turns to a series of case studies, including the documentary Jesus Camp and contemporary American Islamophobia. Placing affect theory in conversation with post-Darwinian evolutionary theory, Schaefer explores the extent to which nonhuman animals have the capacity to practice religion, linking human forms of religion and power through a new analysis of the chimpanzee waterfall dance as observed by Jane Goodall. In this compelling case for the use of affect theory in religious studies, Schaefer provides a new model for mapping relations between religion, politics, species, globalization, secularism, race, and ethics.
Release: 11/13/15
Click Version to purchase: (Kindle), (Hardcover) , or (Paperback)

Rescuing Jesus by:Deborah Jain Lee
An award-winning journalist goes inside the progressive evangelical movement to show readers that today’s young evangelicals are worlds away from the culture-war conservatives that dominate the popular imagination and the politics of the Right.

Most of what we think we know about evangelicals is wrong, or is well on its way to being outdated. Generational changes and the shifting racial make-up of evangelicals are changing what we think of as evangelical politics. Today’s young evangelicals are more likely than their elders to accept homesexuality and same-sex marriage, more inclined to think of “pro-life” issues as being about support for the poor, more likely to be against the death penalty, and more accepting of equality between men and women. The women and men on this leading edge of progressive evangelicalism—white, black, Asian, and Hispanic—are working to change the substance of evangelicalism and to wrest political power away from conservative evangelicals. In Rescuing Jesus, Deborah Jian Lee, a journalist and former evangelical, brings us deep inside this progressive movement and tells the stories of the young evangelicals at the forefront of it. Rescuing Jesus is a book for progressive Christians, disaffected evangelicals, and left-leaning readers concerned about the clout that the evangelical movement still holds in national politics.
Release: 11/10/15
Click Version to purchase: (Kindle) or (Hardcover)