“What the eyes see, and the ears hear, the mind believes…”

Dominic Law is a modern-day Renaissance man, with a plethora of techniques and skills at his disposal. His first couple of cases as a private investigator taught him that everything…and everyone…is not what it seems. His latest cases are no less complicated. One involves a murdered submissive, leading his firm to weed out the real killer from among five jilted lovers—and dominants—with an ax to grind. But will someone unexpectedly plunge the case deeper into confusion? The other investigation brings to surface an issue that is at the center of debate in the fetish community: consent.

Deception takes you back to the streets and dungeons of Atlanta’s fetish community, twisting the cases to their final conclusions and guiding you through the minds of the principal players of Kink, P.I.
Release: 1/12/16
Click to purchase: (Kindle) or (Paperback)

Tell Me Lies (Nothing But The Truth Book 1) by:Michelle Lindo-Rice
A broken heart…When Sydney Richardson meets Pastor Noah Charleston it was practically love at first sight. Sydney has battled so much deception in her personal life and in her work as an attorney, she is glad to have a perfect man she can depend on. But her Prince Charming has some secrets that are worse than Sydney could have ever imagined. What will she do when Noah’s past life come to light?

A broken truth… Pastor Noah Charleston has come a long way since his troubled youth. A respected Man-of-God, Noah’s long buried past emerges in the form of blackmail and threats. Noah not only fears for his safety but also for his newfound love. Will he take a chance on the truth before it’s too late?

A broken trust…Newly converted Christian, Belinda Santiago, harbors a secret that could end her friendship with Sydney. She’s in love with Lance Forbes, Sydney’s ex-fiancé. When Belinda and Lance’s relationship is exposed she may have to choose between her man and her best friend.

A broken man…Lance Forbes returns to Port Charlotte to make things right with Sydney, but his feelings for Belinda are in his way. Lance knows for him to become a do-right man, he must face his childhood pain. Will Lance get his act together and take a chance on love or run again?
Release: 1/12/16
Click to purchase: http://amzn.to/22XwMSW (Kindle) http://amzn.to/22XwUlq (Paperback)

The Silver Box is the most destructive and powerful entity in the universe. Its former master, a member of an alien race known as the Laz, is desperate to control it once more, and the Box itself endeavors to be restored to its former master. Two people must join together to protect the human race from destruction at the hands of the Laz. For the Silver Box will stop at nothing to prevent its former master from returning to being, even if it means destroying the Earth itself.

From life’s meaning to the nature of good and evil, Mosley takes readers on a speculative journey beyond reality in Inside a Silver Box.
Trade Paperback Release: 1/12/16
Click to purchase: http://amzn.to/1Z7qSfa (Paperback)

The Defender by:Ethan Michaeli
Veteran reporter Ethan Michaeli tells the story of a great black Chicago newspaper, the rise and fall of an American family, and the real history of black America in the twentieth century.

Giving voice to the voiceless, the Chicago Defender had a reach and influence extending far beyond Chicago. The newspaper and the family behind it condemned Jim Crow, catalyzed the Great Migration, fostered the integration of the U.S. armed forces in the wake of World War II, and laid the groundwork for the civil rights movement. Over the years, the Defender’s staff included an unparalleled collection of writers, intellectuals, and activists: Ida B. Wells, Langston Hughes, W.E.B. Du Bois, and Jesse Jackson were among the better-known bylines, but there were hundreds of less celebrated reporters at the paper who braved lynch mobs and policemen’s clubs to get their stories.

Through the depth of his research, veteran reporter Ethan Michaeli constructs a revelatory narrative of race in America. The Defender sheds unprecedented light on an entire civic, political, and intellectual universe whose legacy reverberates well into the twenty-first century.
Release: 1/12/16
Click to purchase: http://amzn.to/1Z7nv7P (Kindle) http://amzn.to/1Z7nz7I (Hardcover)

The Social Life of DNA by:Alondra Nelson
The unexpected story of how genetic testing is affecting the story of race in America.

DNA has been a master key unlocking medical and forensic secrets but its genealogical life has also been notable. Genealogy is the second most popular hobby in the US, and the tsunami of interest from the African American community for it has been overwhelming. After personally and professionally delving into the phenomenon for eleven years, Nelson realized that the information coming as a result of genetic testing is being used to grapple with the unfinished business of slavery. It’s being used for reconciliation, to establish ties with African ancestral homelands, to rethink citizenship, and to make unprecedented legal claims for slavery reparations based on genetics. Arguing that DNA offers a new tool for old issues, Nelson shows that the social life of DNA is affecting and transforming 21st century racial politics.
Release: 1/12/16
Click to purchase: http://amzn.to/1YemSHm (Kindle) http://amzn.to/1Z7op4r (Hardcover)

When you hear the word retirement, you probably don’t imagine yourself scrambling to pay your bills in your golden years. But for too many Americans, that’s the fate that awaits unless they take steps now to plan for the future.

Whether you’re twenty-five and starting your first job or fifty-five and watching the career clock start to wind down, today is the day to get serious about your retirement.

In Retire Inspired, Chris Hogan teaches that retirement isn’t an age; it’s a financial number-an amount you need to live the life in retirement that you’ve always dreamed of. With clear investing concepts and strategies, Chris will educate and empower you to make your own investing decisions, set reasonable expectations for your spouse and family, and build a dream team of experts to get you there.

You don’t have to retire broke, stressed, and working long after you want to. You can retire inspired!
Release: 1/12/16
Click to Purchase: http://amzn.to/1Z7prNB (Hardcover) 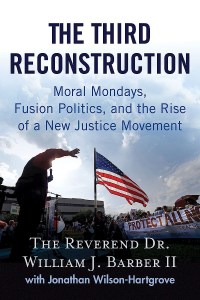 Over the summer of 2013, Rev. William Barber led more than a hundred thousand people at rallies across North Carolina to protest cuts to voting rights and the social safety net, which the state’s conservative legislature had implemented. These protests, which came to be known as Moral Mondays, have blossomed into the largest social movement the South has seen since the civil rights era—and, since then, it has spread to states as diverse as Florida, Tennessee, Wisconsin, and Ohio. In The Third Reconstruction, Rev. Barber tells the story of how he helped lay the groundwork for the Moral Mondays movement and explores the unfulfilled promises of America’s multiethnic democracy. He draws on the lessons of history to offer a vision of a new Reconstruction, one in which a diverse coalition of citizens—black and white, religious and secular, Northern and Southern—fight side-by-side for racial and economic justice for all Americans. The Third Reconstruction is both a blueprint for activism at the state level and an inspiring call to action from the twenty-first century’s most effective grassroots organizer.
Release: 1/12/16
Click to purchase: http://amzn.to/1PpqEZO (Kindle) http://amzn.to/1PpqJg2 (Hardcover) http://amzn.to/1PpqKAq (Paperback) 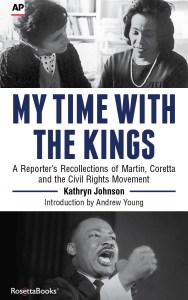 My Time With The Kings by:Kathryn Johnson
“Let Kathryn in,” said Coretta Scott King to authorities.

Three simple words that provided Kathryn Johnson, a reporter for The Associated Press’s Atlanta bureau, unprecedented access to the grieving widow in the days following her husband’s death.

Johnson was on her way to a movie date when word came from Memphis that Martin Luther King Jr. had been assassinated. She immediately headed for the King home where, despite resistance from authorities on the scene, she was the only reporter allowed inside. Johnson’s many years covering King and his family had earned her the trust to be a discreet, observant witness to the aftermath of a defining moment in American history.

Kathryn Johnson covered the civil rights movement across the South in the 1960s, often risking her own safety to observe first-hand the events of this great era. Her stories took her from witnessing the integration of the University of Georgia by dressing as a student, to hiding unobserved under a table near an infamous schoolhouse door in Alabama, to marching with the massive crowd from Selma to Montgomery.

Johnson, one of the only female reporters on the scene, threw herself into charged situations with a determination to break the news no matter what. Including never-before-published photos, her personal account of this period is a singular addition to the story of the civil rights movement.
Release: 1/12/16
Click to purchase: http://amzn.to/1YbxlFn (Kindle) http://amzn.to/1kxgNtl (Paperback) 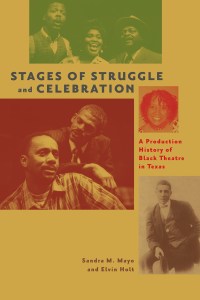 Stages of Struggle and Celebration by:Sandra M. Mayo and Elvin Holt
From plantation performances to minstrel shows of the late nineteenth century, the roots of black theatre in Texas reflect the history of a state where black Texans have continually created powerful cultural emblems that defy the clichés of horses, cattle, and bravado. Drawing on troves of archival materials from numerous statewide sources, Stages of Struggle and Celebration captures the important legacies of the dramatic arts in a historical field that has paid most of its attention to black musicians.

Setting the stage, the authors retrace the path of the cakewalk and African-inspired dance as forerunners to formalized productions at theaters in the major metropolitan areas. From Houston’s Ensemble and Encore Theaters to the Jubilee in Fort Worth, gospel stage plays of the Black Academy of Arts and Letters in Dallas, as well as San Antonio’s Hornsby Entertainment Theater Company and Renaissance Guild, concluding with ProArts Collective in Austin, Stages of Struggle and Celebration features founding narratives, descriptions of key players and memorable productions, and enlightening discussions of community reception and the business challenges faced by each theatre. The role of drama departments in historically black colleges in training the companies’ founding members is also explored, as is the role the support of national figures such as Tyler Perry plays in ensuring viability. A canon of Texas playwrights completes the tour. The result is a diverse tribute to the artistic legacies that continue to inspire new generations of producers and audiences.
Release: 1/15/16
Click to purchase: http://amzn.to/1MsNoX6 (Hardcover) http://amzn.to/1MsNkXr (Paperback)