{Excerpt} When a Man Loves a Woman: A Season of Change by:Tumika Patrice Cain 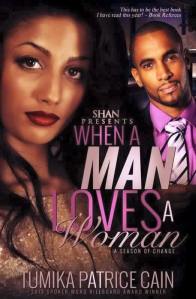 The first physical attack I suffered at Avery’s hands was about a year and a half into the marriage. Working in advertising can be quite wearing at times, requiring long hours and sleepless nights. Such was the case here. My team and I were trying to close the biggest account of the year. We ordered carry out for dinner and since Avery said he’d be late coming home, I figured we’d arrive home around the same time and I wouldn’t bother to call. I never answer my phone when I’m scrambling to meet a deadline. By the time we were finished, it was seven o’clock the next morning and I’d forgotten to call home.

I tried to be quiet coming in because it was Avery’s off day and I knew he’d be asleep. No sooner had my key touched the lock did the door fly open. Before I even had a chance to be startled about the door being opened for me, Avery had grabbed a handful of my hair, yanked me inside, closed the door and was repeatedly slapping my face. He was hitting me so hard I thought my eyes might pop out. I probably would’ve felt better if they had.

“Avery, stop! STOP! You’re hurting me!” He didn’t even seem to hear me.

“Are you cheating on me? Where have you been?”

“No, you weren’t. Do you know how many times I called there and got no answer? Don’t lie to me. Where were you?”

“I was finishing up that big account I told you about. Stop hitting me!” I was hysterical by this time. Yelling, screaming. He still had a hold of my hair.
“Shut your mouth with all that screaming, Alicia. Do you want the neighbors to hear? This is between you and me. You hear me?” That was when I noticed that he’d never even raised his voice. I suppose that in and of itself is not surprising, because he is not one for yelling, but I thought that someone upset enough to hit another person might also be upset enough to yell. I also noticed that I didn’t care who heard me. Maybe someone would help get this crazy man off of me.

“Why didn’t you call me when you knew you were going to be working late?” He wasn’t ready to forgive me yet. The verdict had come in, and in his mind, I had not been at work. He really thought I was messing around on him. I don’t know what hurt more, the accusations or the beating he was putting on me.
“It just slipped my mind. I told you when we were dating that sometimes we have to pull all-nighters during deadline time. Don’t you remember? I also mentioned before you left yesterday that I might be working late. I wasn’t out with another man. I promise, Avery. Please let go of my hair.” I was pleading with him. I had a migraine so intense it was blinding. Had even managed to say all of this in a quiet voice. I didn’t want to set him off again. Instinctively, I must have known it would get worse before it got better. At least he’d stopped hitting me.

When he finally released his grip, I realized we had moved from the entry hall through the living room and into our bedroom at the end of the hall.

“Alicia, I am upset with you right now. I can’t talk to you. Just take your clothes off and go to bed.” Quiet thunder was in his voice. I headed for the bathroom.

“Where do you think you are going?”

“To the bathroom to wash my face and brush my tee…”

“No. I said get in the bed and I mean right now.” He cut me off before I could even finish my sentence. I did as he said. I was too afraid not to. Never had I seen him like that, so my fear was genuine. The look on his face still sends shivers into my soul. I didn’t know who that stranger was standing in front of me who looked like Avery, but who certainly wasn’t acting like him. One thing was certain, I didn’t want to learn what other evil tricks he had waiting up his sleeve.

How he expected me to sleep, I have no idea. Of course, I couldn’t sleep. I was too busy crying. My head ached. My face stung.

“Stop shaking the bed and come over here.” Unnoticed he’d climbed in on his side of the bed. I jumped when he spoke to me.

“I’d rather not.” My back was to him as I said it. The shaking that he spoke of was my body trembling in fright and nervous anticipation of whatever else lay ahead.

“Alicia, I’m not going to hurt you. Just let me hold you, all right?” Silence lingered between us like bad breath. “Come on, baby,” his voice growing softer with each word. I went to him, reacting with fear and uncertainty. He rolled me over and pulled me closer to him, laying my head on his chest. I cringed when I felt him caressing the back of my head and down my back. His touch made my skin crawl.

“Tell me what happened last night.”

Somehow through sniffles I managed to relay the events of the day.

“When no one answered the front desk, I began to worry. I’d already tried your direct line six times.”

“Our receptionist leaves at 5:00, that’s why we all have direct lines. During deadline times, we are too busy to answer the phones. That’s the truth.”
“Oh, baby. I’m so sorry I became upset.” I felt myself stiffen at his words. He was more than just upset. He was out of control.

I found it unbelievable that my gentle Avery had the ability to lay hard hands on me with the intent to bring nothing but pain. Lying there with him, I couldn’t bring myself to look at him. His touch repulsed me, but I couldn’t find the strength to loosen the hold he had on me.

Looking back, I suppose I was grateful that the long night was a Thursday. The managers were very lax about giving us time off when we’d pulled overnighters like that. A three- day weekend was just what I needed. Emotionally, as well as, spiritually.

Avery wouldn’t let me loose. Just kept me nestled against him, stroking my back. Eventually, I fell asleep within the folds of his familiar embrace. Upon waking, I made my usual beeline to the bathroom. I really had to go! I’d forgotten that Avery wouldn’t let me go before I went to bed.

Standing at the sink washing my hands I chanced a glance in the mirror and gasped. I was a wreck. Hair all over my head. Eyes bloodshot and nearly swollen shut from all the crying. Cheeks very red from all the blows I’d received. At first I looked in disbelief, then I just hung my head and cried. I lightly touched a tender bruise that had started to form on my cheek. My whole body ached. The pounding in my temples seemed to increase with every movement made. Guess I never realized how much exertion went into fighting.

I gathered my belongings for a bath. There were a million thoughts running around my head, but I couldn’t distinguish one from another. A hot bath is just what I needed. Maybe the steam would permeate my pores and unleash all the bitter feelings I had growing inside. Pear-scented air filled my nose as I lay back in the tub, resting my head on the cold, hard marble. Confusion ran rampant in my mind. I didn’t know what to do. Well, that’s not entirely true. I did know what I wanted to do. I wanted to leave him and never look back.
By the time I exited the tub, my mind was all made up. I was leaving. That is until I glanced in the mirror again. I felt the walls begin to close in on me. I couldn’t leave. Not looking the way I did. I looked like someone had just beaten me up. Of all the feelings I had at the time, embarrassment had to be the most prevalent. I was too embarrassed to tell anyone. Too embarrassed to go into the streets with that bruise forming on my face. Mocking me. Too embarrassed that I had allowed this to happen.

Melancholy settled on me like acceptance does to a prisoner on death row. I was stuck. It wasn’t that I didn’t have anywhere to go. Kate’s doors were always open to me. So were Aunt Gilly’s. But like I said, embarrassment immobilized me.

Avery awoke and his eyes sought mine as I descended from the bathroom. I wouldn’t, couldn’t meet his gaze. I kept my eyes on the floor.

“Good morning, Alicia.” His voice was a soft caress that was almost my undoing.

“Afternoon, Avery.” I was on my way out of the room when I heard him call my name.

“Alicia, come here for a minute. I want to talk to you.”

“Aren’t you listening? I am upset and I don’t feel like talking. Don’t pressure me, Avery!” By this time, I’d spun around on my heels and stood in the doorway glaring at him. I didn’t feel like being hounded. He was the one that opened up this can of worms. Now that they were out of the can, he’d just have to deal with whatever I felt like dishing out until I could make up my own mind. I was not going to be bullied or coerced into seeing this through his eyes. After all, no one told him to put his hands on me.

I heard him say, “I’m sorry…” But that was the last thing I heard because I went to sit on the patio. The condo felt small that day.

One response to “{Excerpt} When a Man Loves a Woman: A Season of Change by:Tumika Patrice Cain”