Solemn by:Kalisha Buckhanon
Solemn Redvine is a precocious Mississippi girl who senses a nearby baby may be her half-sibling: the outcome of her father’s mistakes with a married woman who lives in their trailer park. After Solemn witnesses a man throw the baby down a community well, she struggles to understand the event, leaving her forever changed.

As Solemn finds refuge in fantasies of stardom as well as friendships with her brother’s wife and a nearby girl, the ill-fated baby’s doomed mother disappears without a trace. Solemn remains trapped by connections to the missing other woman and an honest cop who suspects more to the story than others on the small local police force want to see. When her father’s next mistake – a robbery – lands Solemn in a group home for troubled girls, she meets a Chicago delinquent who wants to escape. There, Solemn must face the truth of who she really is and what she is really made of.
Release: 5/3/16
Click to purchase: (Kindle) or (Hardcover) 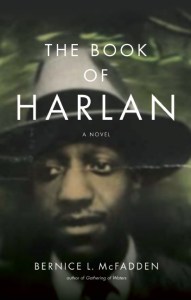 The Book of Harlan by:Bernice L. McFadden
The Book of Harlan opens with the courtship of Harlan’s parents and his 1917 birth in Macon, Georgia. After his prominent minister grandfather dies, Harlan and his parents move to Harlem, where he becomes a musician. Soon, Harlan and his best friend, trumpeter Lizard Robbins, are lured across the Atlantic Ocean to perform at a popular cabaret in the Parisian enclave of Montmartre–affectionately referred to as “The Harlem of Paris” by black American musicians.

When the City of Light falls under Nazi occupation, Harlan and Lizard are thrown into Buchenwald, the notorious concentration camp in Weimar, Germany. The experience irreparably changes the course of Harlan’s life. Based on exhaustive research and told in McFadden’s mesmeric prose, The Book of Harlan skillfully blends the stories of McFadden’s familial ancestors with those of real and imagined characters.
Release: 5/3/16
Click to purchase: (Kindle) , (Paperback) or (Hardcover)

Fatal Attraction by:Jasmine Devonish and K. Adore
Twins, Kassidy and Kennedy Armstrong have it all except the love of two good men, so they decide that before they go off to college they’re going to make the best of their summer.

The fun starts the night of their 18th birthday when they meet club owners Cartier and Ellis. It wasn’t love at first sight because the men had to save the girls from Travien, Kassidy’s ex, who doesn’t seem to understand that she’s done with him.

Cartier is fully aware of exes who don’t want to let go, because he has a pregnant ex named Suzette who refuses to believe that he doesn’t want her.

What happens when the two fatally attracted exes meet up? Who is left standing? And which couples will make it through the storm?
Release: 5/2/16
Click to purchase: (Kindle) 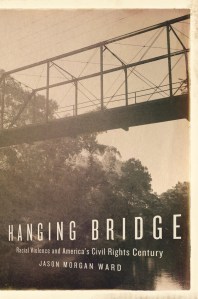 Hanging Bridge by:Jason Morgan Ward
Even at the height of the civil rights movement in the 1960s, when the clarion call for equality and justice echoed around the country, few volunteers ventured into Clarke County, Mississippi. Fewer still remained. Located just south of Neshoba County, where three civil rights workers had been murdered during 1964’s Freedom Summer, Clarke lay squarely in what many considered Mississippi’s, and thus America’s, meanest corner. Local African Americans knew why the movement failed there. Some spoke of a bottomless hole in the snaking Chickasawhay River in the town of Shubuta, where white vigilantes had for decades dumped the bodies of murdered African Americans. Others more spoke of a “hanging bridge” that spanned that same muddy creek.

Spanning three generations, Hanging Bridge reveals what happened in Clarke Country in 1919 and 1942, when two horrific lynchings took place, the first of four young people, including a pregnant woman, the second, of two teenaged boys accused of harassing a white girl. Jason Ward’s painstaking and haunting reconstruction of these events traces a legacy of violence that reflects the American experience of race, from the depths of Jim Crow through to the growing power of the NAACP and national awareness of what was taking places even in the country’s bleakest racial landscapes. Connecting the lynchings to each other and then to the civil rights struggles in the 1960s, when the threat of violence hung heavy over Clark County, Ward creates a narrative that links living memory and verifiable fact, illuminating one of the darkest places in American history and revealing the resiliency of the human spirit.
Release: 5/2/16
Click to purchase: (Kindle) or (Hardcover)

American Maelstrom by:Michael A. Cohen
In January of 1965, Lyndon Baines Johnson delivered his inaugural address as president from the steps of the U.S. Capital and announced his vision for an America that would soon see “an end to poverty and racial injustice.” Johnson had been elected by a landslide over the conservative Barry Goldwater and, bolstered by the “liberal consensus,” economic prosperity, and a strong wave of nostalgia for his martyred predecessor, John Kennedy, the new president would usher in the most ambitious government agenda since the early days of the New Deal. However, by 1968, merely three years later, everything had changed. Johnson’s approval ratings had plummeted; the liberal consensus was shattered; the war in Vietnam splintered the nation; and the politics of civil rights had created a fierce white backlash. A report from the National Committee for an Effective Congress warned of a “national nervous breakdown.”

The 1968 presidential election was thus caught up in a swirl of powerful forces and the eight men who sought the nation’s highest office attempted to ride them to victory–or merely survive them. Eugene McCarthy focused the youthful energy anti-war movement; George Wallace, the working-class white backlash; Robert Kennedy, the mantle of his slain brother. Entangled in Vietnam, Johnson, stunningly, opted not to run again, scrambling the odds. The assassinations of first Martin Luther King, Jr. and then Bobby Kennedy seemed to push the country to the brink of chaos, a chaos reflected in the Democratic Convention in Chicago, a televised horror show. Vice President Hubert Humphrey, finally liberating himself from Johnson’s grip, waged a tardy campaign that nearly overcame the lead long enjoyed by Richard Nixon who, by exploiting division and channeling the yearning for order, was the last man standing.

In American Maelstrom, Michael A. Cohen captures the full drama of this watershed election, establishing 1968 as the hinge between the decline of political liberalism and the ascendancy of conservative populism and the anti-government attitudes that continue to dominate the nation’s political discourse, taking us to the source of the politics of division.
Release: 5/4/16
Click to purchase: (Kindle) or (Hardcover) 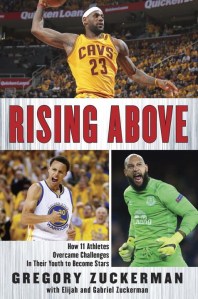 Rising Above : How 11 Athletes Overcame Challenges in Their Youth to Become Stars by:Gregory Zuckerman, Elijah Zuckerman
Some of the most accomplished and famous athletes in the world—LeBron James, Stephen Curry, Tim Howard, and more—had to first overcome obstacles off the playing field as kids more challenging than the ones they face now as professionals. An inspiring read for kids and sports fans of all ages.

Team USA goalkeeper Tim Howard was diagnosed with Tourette Syndrome in 6th grade. He went on to become a national treasure after single-handedly keeping America competitive in the 2014 World Cup. Stephen Curry was told he was too small, too weak, and too slow to even receive a scholarship to play college basketball. He outworked everyone and went on to become MVP of the National Basketball Association. Dwyane Wade has achieved even more success in the NBA than Curry. He grew up dirt poor on the streets of Chicago, raised by a single mom who sold drugs and was an addict herself; at age 6 he stood helplessly watching as police raided his home with guns drawn. He found his salvation and priorities on the basketball court. Jim Abbott was born without his right hand, yet he refused to be defined by what he lacked. He went on to pitch a no-hitter in the Major Leagues.

Athlete after athlete in this book found discipline, hope, and inspiration on the playing field, rising above their circumstances. Filled with first-hand accounts from stars who exemplify the idea of enduring at all costs, Rising Above will serve as a source of inspiration for kids and sports fans of all ages.