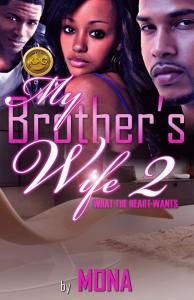 My Brother’s Wife 2: What The Heart Wants by:Mona
In this second installment of My Brother’s Wife, emotions are at an all time high. Lines have been crossed, loyalties have been tested, bonds have been broken and more secrets will be revealed. The two brothers are at war and the infamous deal between Andre and Malachi has been exposed.

Arianna and Malachi have committed a heart wrenching betrayal, which will unleash the hidden beast in Andre, causing a physical confrontation.

Andre’s heart has been broken and his emotions have spiraled out of control. The brotherhood he shared with Malachi is now rocky and his marriage to Arianna is in turmoil.

In the aftermath of betrayal; Andre’s love and what his heart really wants are in question, as well as Malachi’s actions, true intentions and loyalty. Arianna must make a difficult choice.

In the midst of this love triangle; a custody battle unfolds between Ava and Jason leading to their heartfelt secrets that will change their lives forever. Once Ava’s secret is revealed, will she be open to love again or will she hold on to hurt from the past?

Angeline and Desmond’s attraction to each other are undeniable, however, fear, trust issues and insecurities based on Desmond’s past makes it difficult for her to come to terms with her true feelings.

Rolonda and Ian are ready to unveil their relationship to everyone around them, which will result in shocking secrets no one saw coming, including Ian’s deepest secret of all.

Will Desmond and Angeline quit their cat and mouse game? Will Rolonda and Ian’s relationship be welcomed or will it cause tension and confusion? And will Ian’s secret lead to tragedy?

The story of Malachi, Andre and Arianna continues and will have you on the edge of your seat as the battle for Arianna’s heart begins.
Release: 5/16/16
Click to purchase: (Kindle)

Scared To Love Again by:Melissa Kelly
Iris Jackson is head over heels in love with her husband Levi. Levi is an up and coming politician, who no longer has a place for Iris in his life. His desire is to put Iris out on her own… broke and homeless. Iris has no choice, she must return to the hometown that she hates.

Towanda Turner, Iris’s best friend, opens her heart and door for Iris, but what she doesn’t know is her past is coming back to haunt her.

Ian Roberts wasn’t looking for love. It just fell in his lap. When Ian finds out Levi poses a threat to Iris, Ian is the first person in line to stop him with nothing but murder and mayhem on his mind.

Lies, deceit and drama coming from every direction of her life, Iris is scared to love again. Will she live long enough to discover what eternal love is? Find out in Scared To Love Again…
Release: 5/18/16
Click to purchase: (Kindle)

Second Chance by:Pat Smith
Make the most of your second chance! Media personality Pat Smith, wife of NFL Hall of Famer Emmitt Smith, shares inspiring stories from her own life and others’ to help you overcome challenging circumstances and find healing. With practical tips, this book will empower you to move forward, rediscover joy, and recommit to fulfilling your God-given destiny.

Let Go of the Past–Embrace Your Second Chance

You have a destiny. You may have lost sight of it, opened a wrong door, taken a misleading path, but it’s there–you haven’t missed your chance! Yet it can be hard to see, hard to find, when the only things in front of you are challenging circumstances, lost opportunities, or overwhelming obstacles. But there is hope!

With warmth and insight, Pat Smith shares the truths she and other women have learned on their own journeys from heartache to hope. She encourages and empowers you to recommit to the destiny God has for you in life, love, work, and faith. She also shows how to let go of what’s holding you back, reinvent yourself, and rediscover your purpose and joy. There is a second chance waiting for you–it’s time to celebrate your new life!
Release: 5/17/16
Click to purchase: (Kindle) or (Hardcover) 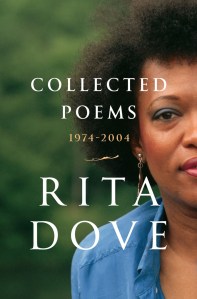 Collected Poems 1974-2004 by:Rita Dove
Three decades of powerful lyric poetry from a virtuoso of the English language in one unabridged volume.

Rita Dove’s Collected Poems: 1974–2004 showcases the wide-ranging diversity that earned her a Pulitzer Prize, the position of U.S. poet laureate, a National Humanities Medal, and a National Medal of Art. Gathering thirty years and seven books, this volume compiles Dove’s fresh reflections on adolescence in The Yellow House on the Corner and her irreverent musings in Museum. She sets the moving love story of Thomas and Beulah against the backdrop of war, industrialization, and the civil right struggles. The multifaceted gems of Grace Notes, the exquisite reinvention of Greek myth in the sonnets of Mother Love, the troubling rapids of recent history in On the Bus with Rosa Parks, and the homage to America’s kaleidoscopic cultural heritage in American Smooth all celebrate Dove’s mastery of narrative context with lyrical finesse. With the “precise, singing lines” the Washington Post praised her for, Dove “has created fresh configurations of the traditional and the experimental” (Poetry).
Release: 5/17/16
Click to purchase: (Kindle) or (Hardcover) 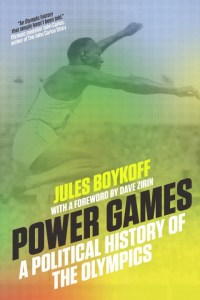 The Olympics have a checkered, sometimes scandalous, political history. Jules Boykoff, a former US Olympic team member, takes readers from the event’s nineteenth-century origins, through the Games’ flirtation with Fascism, and into the contemporary era of corporate control. Along the way he recounts vibrant alt-Olympic movements, such as the Workers’ Games and Women’s Games of the 1920s and 1930s as well as athlete-activists and political movements that stood up to challenge the Olympic machine.
Release: 5/17/16
Click to purchase: (Kindle) or (Paperback) 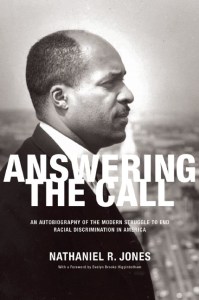 Answering the Call: An Autobiography of the Modern Struggle to End Racial Discrimination in America by:Nathaniel R. Jones and Evelyn Brooks Higginbotham
Answering the Call is an extraordinary eyewitness account from an unsung hero of the battle for racial equality in America—a battle that, far from ending with the great victories of the civil rights era, saw some of its signal achievements in the desegregation fights of the 1970s and its most notable setbacks in the affirmative action debates that continue into the present in Ferguson, Baltimore, and beyond.

Judge Nathaniel R. Jones’s pathbreaking career was forged in the 1960s: as the first African American assistant U.S. attorney in Ohio; as assistant general counsel of the Kerner Commission; and, beginning in 1969, as general counsel of the NAACP. In that latter role, Jones coordinated attacks against Northern school segregation—a vital, divisive, and poorly understood chapter in the movement for equality—twice arguing in the pivotal U.S. Supreme Court case Bradley v. Milliken, which addressed school desegregation in Detroit. He also led the national response to the attacks against affirmative action, spearheading and arguing many of the signal legal cases of that effort.

Judge Jones’s story is an essential corrective to the idea of a post-racial America—his voice and his testimony offering enduring evidence of the unfinished work of ending Jim Crow’s legacy.
Release: 5/17/16
Click to purchase: (Kindle) or (Hardcover)

Geto Boys’ The Geto Boys (33 1/3) by:Rolf Potts
At the outset of summer in 1990, a Houston gangsta rap group called the Geto Boys was poised to debut its self-titled third album under the guidance of hip-hop guru Rick Rubin. What might have been a low-profile remix release from a little-known corner of the rap universe began to make headlines when the album’s distributor refused to work with the group, citing its violent and depraved lyrics. When The Geto Boys was finally released, chain stores refused to stock it, concert promoters canceled the group’s performances, and veteran rock critic Robert Christgau declared the group “sick motherfuckers.”

One quarter of a century later the album is considered a hardcore classic, having left an immutable influence on gangsta rap, horrorcore, and the rise of Southern hip-hop.

Charting the rise of the Geto Boys from the earliest days of Houston’s rap scene, Rolf Potts documents a moment in music history when hip-hop was beginning to replace rock as the transgressive sound of American youth. In creating an album that was both sonically innovative and unprecedentedly vulgar, the Geto Boys were accomplishing something that went beyond music. To paraphrase a sentiment from Don DeLillo, this group of young men from Houston’s Fifth Ward ghetto had figured out the “language of being noticed” – which is, in the end, the only language America understands.
Release: 5/17/16
Click to purchase: (Kindle) or (Paperback)

Baltimore. Ferguson. Tottenham. Clichy-sous-Bois. Oakland. Ours has become an “age of riots” as the struggle of people versus state and capital has taken to the streets. Award-winning poet and scholar Joshua Clover offers a new understanding of this present moment and its history. Rioting was the central form of protest in the seventeenth and eighteenth centuries, and was supplanted by the strike in the early nineteenth century. It returned to prominence in the 1970s, profoundly changed along with the coordinates of race and class.

From early wage demands to recent social justice campaigns pursued through occupations and blockades, Clover connects these protests to the upheavals of a sclerotic economy in a state of moral collapse. Historical events such as the global economic crisis of 1973 and the decline of organized labor, viewed from the perspective of vast social transformations, are the proper context for understanding these eruptions of discontent. As social unrest against an unsustainable order continues to grow, this valuable history will help guide future antagonists in their struggles toward a revolutionary horizon.
Release:5/17/16
Click to purchase: (Kindle) or (Hardcover)