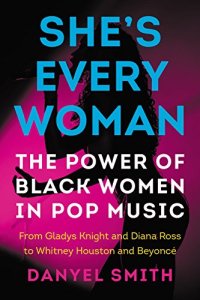 She’s Every Woman by:Danyel Smith
In the vein of Twenty Feet from Stardom and Girls Like Us comes an authoritative narrative history of one of the most powerful segments of popular music—black female recording artists—told through the stories of some of the most famous and beloved female stars of our age, including Aretha Franklin, Gladys Knight, Whitney Houston, and Janet Jackson, from the former editor-in-chief of Billboard and Vibe magazines.

Drawing on hundreds of original interviews and her own expert insights gleaned from years of personal and professional experience, Danyel Smith charts the evolution of African American women in popular music, from “race music” “girl groups” and backup singers to the queens who have risen to the pinnacle of the entertainment industry, such as Whitney Houston, Beyoncé, and Rihanna.

Smith begins her story in the 1950s and touches on the major stars of each decade to today—including many whose contributions have long been forgotten—bringing into focus some of the most unforgettable voices of the last six decades. She’s Every Woman weaves together the lives of these marquee talents, the men who promoted their success or sometimes held them back, the industry insiders who orchestrated their images, and the role of fans in propelling them to stardom. As she examines their careers and their experiences, Smith makes clear these women’s powerful influence on the music industry and popular culture itself.

Throughout this lively survey, Smith speaks to larger questions of race, gender politics, and the changing landscape of entertainment. The result is a fascinating portrait of American culture, the black experience, the changing face of the ever-evolving music industry, and fresh truths about female empowerment.
Release: 2/21/17
Click to purchase: (Hardcover)

The Resolution (Pulled from the Headlines Book 1) by:Michelle Lindo-Rice
When Geneva Samson’s fiancé breaks up with her via text message, she resolves she will not allow this heartbreak to discourage her. So, she posts a wanted ad on her social media page for a ‘stand-in’ to go with her on what would have been her honeymoon to Montego Bay, Jamaica, for the New Year. She never expected to become an overnight sensation. Geneva receives over 1,000 offers by men bearing the same name. When the ultimate bad boy of showbiz volunteers, will this good girl grant his request?

Joshua James has been on tour for fifteen months and is tired of the fast life, fast food and fast women. He resolves that after the New Year, he will make some much-need lifestyle changes. When he sees the ad, the lure of relaxing at the luxurious Iberia Star in Montego Bay calls out to him and he decides to put his name in the mix. He could use a vacation from the spotlight. But when he meets the woman behind the ad, will he settle for being her stand-in or will he want a taste of the real thing?
Release: 2/21/17
Click to purchase: (Kindle)

Next in line as CEO of his family’s international luxury-resort empire, Liam Westbrook didn’t make his way to the top playing it safe. So when the fast-living British bachelor spies an exotic beauty under a smoldering North Carolina moon, he makes a scandalous proposal. The night culminates in an all-consuming passion that leaves them both burning for more. Liam knows he can’t just walk away. But after a devastating past betrayal, can he trust where his heart is leading him?

Maya Alvarez’s two young daughters are her entire world. But when she ends up alone—on her birthday—the divorced single mother does something totally out of character. She accepts an invitation that leads to a hot summer fling with a seductive stranger who makes her feel bold and desirable again. When Maya must return to the real world, will Liam and their pleasure-fueled fantasy end up as only an affair to remember?
Release: 2/21/17
Click to purchase: (Mass Market Paperback) or (Kindle) 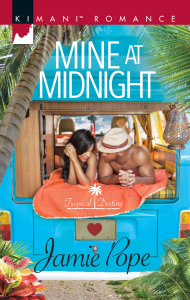 Mine at Midnight (Tropical Destiny) by:Jamie Pope
Is this their happy ending?

After her plans for a storybook wedding are derailed by a shocking discovery days before the big event, Ava Bradley retreats to a tranquil beach cottage. Days of intense soul-searching turn into nights of passionate yearning when she clashes with her infuriatingly arrogant and incredibly sexy Hideaway Island neighbor. Derek Patrick is tempting her, not just as a lover but as a soul mate, and it’s a connection unlike anything she’s ever experienced before.

The up-by-his-bootstraps entrepreneur is proud to be mayor of the beautiful, secluded tropical island. Derek doesn’t need some social-climbing diva messing with his hard-earned serenity. Yet Ava keeps surprising him. When their no-strings affair leaves them both hungry for more, Derek is tempted to take their island affair to the next level. But Ava doesn’t intend to make her permanent home there…until a natural disaster threatens Derek’s beloved island, making them realize what matters most—a love too precious to lose.
Release: 2/21/17
Click to purchase: (Mass Market Paperback) or (Kindle) 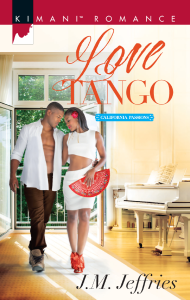 Former child star Roxanne Deveraux is stepping back into the spotlight. Tired of growing up in front of sitcom cameras, she left Hollywood and her controlling parents to finally follow her true passion, which exists offstage. Still, the offer to appear on Celebrity Dance is hard to resist—as is Nicholas Torres, her dance partner. He’s creative, passionate, and they’re growing more and more in sync—until family interference throws everything off balance.

Nick had a hunch that Roxanne would prove a smash-hit contestant. But he’s taken aback by her beauty, poise and his desire to partner with her off the dance floor. Watching her confidence and skill soar each week is a thrill. But as Roxanne’s chaotic past resurfaces and a secret threatens to tear his own family apart, both must weigh old loyalties against the promise of a brilliant future together.
Release: 2/21/17
Click to purchase: (Mass Market Paperback) or (Kindle)

Seduced by the Bachelor (The Morretti Millionaires) by:Pamela Yaye
A game of seduction

Tatiyana Washington will do whatever it takes to right a wrong for her beloved sister…even if it means deceiving one of LA’s most celebrated attorneys. Flirting with elegant, sexy Markos Morretti on a Florida-bound plane is the first step. The irresistible Italian plays right into her hands when he invites her to be his guest at a celebrity-studded charity golf tournament. Spending a sizzling weekend together is a perk Tatiyana didn’t expect. Too bad it can never lead to anything permanent.

The wealthy Hollywood divorce lawyer splits couples up for a living. Yet once he meets Tatiyana, all Markos wants is to lavish her with all his passion. And once he discovers they have met under false pretenses, he only desires her more. Markos vows that two can play at this game, until a brewing political scandal threatens to make his career ambitions crash and burn. Faced with an impossible decision, will he choose the promise of love?
Release: 2/21/17
Click to purchase: (Mass Market Paperback) or (Kindle) 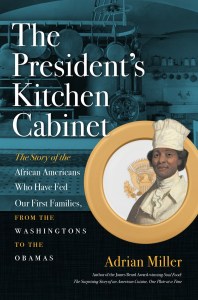 The President’s Kitchen Cabinet by:Adrian Miller
James Beard award–winning author Adrian Miller vividly tells the stories of the African Americans who worked in the presidential food service as chefs, personal cooks, butlers, stewards, and servers for every First Family since George and Martha Washington. Miller brings together the names and words of more than 150 black men and women who played remarkable roles in unforgettable events in the nation’s history. Daisy McAfee Bonner, for example, FDR’s cook at his Warm Springs retreat, described the president’s final day on earth in 1945, when he was struck down just as his lunchtime cheese souffle emerged from the oven. Sorrowfully, but with a cook’s pride, she recalled, “He never ate that souffle, but it never fell until the minute he died.”

A treasury of information about cooking techniques and equipment, the book includes twenty recipes for which black chefs were celebrated. From Samuel Fraunces’s “onions done in the Brazilian way” for George Washington to Zephyr Wright’s popovers, beloved by LBJ’s family, Miller highlights African Americans’ contributions to our shared American foodways. Surveying the labor of enslaved people during the antebellum period and the gradual opening of employment after Emancipation, Miller highlights how food-related work slowly became professionalized and the important part African Americans played in that process. His chronicle of the daily table in the White House proclaims a fascinating new American story.
Release: 2/21/17
Click to purchase: (Hardcover), (Kindle), (Audible), (Audio CD)

When seventeen-year-old Rowan Chase finds a skeleton on her family’s property, she has no idea that investigating the brutal century-old murder will lead to a summer of painful discoveries about the past… and the present.

Nearly one hundred years earlier, a misguided violent encounter propels seventeen-year-old Will Tillman into a racial firestorm. In a country rife with violence against blacks and a hometown segregated by Jim Crow, Will must make hard choices on a painful journey towards self discovery and face his inner demons in order to do what’s right the night Tulsa burns.

Through intricately interwoven alternating perspectives, Jennifer Latham’s lightning-paced page-turner brings the Tulsa race riot of 1921 to blazing life and raises important question about the complex state of US race relations – both yesterday and today.

Yes, I talk to dead people and they talk back! And the conversations we’ve engaged in are mind-blowing! I’ve talked to ancient rulers, such as Nefertiti, went on an excursion to the Hall of Records with Nostradamus, and had my emotions twisted into knots when I listened to the stories of abused women who met their death through domestic violence.

I didn’t always utilize my ability to interact with the spirit world. I’ve been on and off the spiritual path throughout my entire life, but when I was introduced to Afterlife Coach, Erik Medhus, my life began to change in a very profound way. Erik refers to himself as my “Afterlife Coach” and he is one of the many spirit guides I’ve discovered during this adventure.

As I tentatively asked for Erik’s guidance, I began to experience synchronicities and miracles. His persistence and sometimes unorthodox encouragement opened me to a wondrous new world that I would have never dreamed possible. At last I had the tools to live a life filled with peace, joy, fulfillment, and spiritual growth that had eluded me.

Join me as I share my amazing journey in finding answers to age old questions that have plagued mankind since millennia. The knowledge and tools that I received during this quest have changed my life forever and will change yours too. Prepare to have your belief systems rocked and your eyes opened wide as you begin to see every aspect of your life from an entirely new perspective. You’ll make the exhilarating discovery that you are never at the mercy of happenstance and that your Eternal Soul never dies. You’ll have access to a blueprint to live your life free from fear and worry, and be able to live the joyous life your Higher Self intended for you.

Within these pages, you’ll discover the steps to take in order to begin your own journey of spiritual growth and evolution. Procrastinate no more. Miracles await you!
Release: 2/21/17
Click to purchase: (Kindle)