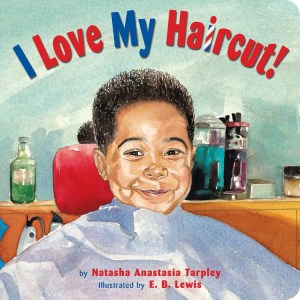 I Love My Haircut! by:Natasha Anastasia Tarpley
In this companion to the top-selling I Love My Hair! (originally titled and adapted from Bippity Bop, Barbershop), a young boy named Miles makes his first trip to the barbershop with his father–but he’s afraid that the haircut will hurt! With the support of his dad, the barber, and the other men in the barbershop, Miles bravely sits through his first haircut. In the end, Miles’s father even decides to receive the same haircut as Miles! Now in board book format, here is a much-needed story about a milestone moment for toddlers, featuring African American characters and a loving father-son relationship that is perfect for Father’s Day and all year round.
Release: 3/7/17
Ages: 0 to 3, Grades: P to P
Click to purchase: (Board Book)

When Ellen Johnson Sirleaf won the 2005 Liberian presidential election, she demolished a barrier few thought possible, obliterating centuries of patriarchal rule to become the first female elected head of state in Africa’s history. Madame President is the inspiring, often heartbreaking story of Sirleaf’s evolution from an ordinary Liberian mother of four boys to international banking executive, from a victim of domestic violence to a political icon, from a post-war president to a Nobel Peace Prize winner.

Pulitzer Prize–winning journalist and bestselling author Helene Cooper deftly weaves Sirleaf’s personal story into the larger narrative of the coming of age of Liberian women. The highs and lows of Sirleaf’s life are filled with indelible images; from imprisonment in a jail cell for standing up to Liberia’s military government to addressing the United States Congress, from reeling under the onslaught of the Ebola pandemic to signing a deal with Hillary Clinton when she was still Secretary of State that enshrined American support for Liberia’s future.

Sirleaf’s personality shines throughout this riveting biography. Ultimately, Madame President is the story of Liberia’s greatest daughter, and the universal lessons we can all learn from this “Oracle” of African women.
Release: 3/7/17
Click to purchase: (Kindle) or (Hardcover)

Critique of Black Reason by:Achille Mbembe
In Critique of Black Reason eminent critic Achille Mbembe offers a capacious genealogy of the category of Blackness—from the Atlantic slave trade to the present—to critically reevaluate history, racism, and the future of humanity. Mbembe teases out the intellectual consequences of the reality that Europe is no longer the world’s center of gravity while mapping the relations among colonialism, slavery, and contemporary financial and extractive capital. Tracing the conjunction of Blackness with the biological fiction of race, he theorizes Black reason as the collection of discourses and practices that equated Blackness with the nonhuman in order to uphold forms of oppression. Mbembe powerfully argues that this equation of Blackness with the nonhuman will serve as the template for all new forms of exclusion. With Critique of Black Reason, Mbembe offers nothing less than a map of the world as it has been constituted through colonialism and racial thinking while providing the first glimpses of a more just future.
Release: 3/10/17
Click to purchase: (Hardcover), (Paperback), (Kindle)

Jackie Robinson: A Spiritual Biography: The Faith of a Boundary-Breaking Hero by:Michael G. Long
Jackie Robinson believed in a God who sides with the oppressed and who calls us to see one another as sisters and brothers. This faith was a powerful but quiet engine that drove and sustained him as he shattered racial barriers on and beyond the baseball diamond. Jackie Robinson: A Spiritual Biography explores the faith that, Robinson said, carried him through the torment and abuse he suffered for integrating the major leagues and drove him to get involved in the civil rights movement. Marked by sacrifice and service, inclusiveness and hope, Robinson’s faith shaped not only his character but also baseball and America itself.
Release: 3/10/17
Click to purchase: (Paperback)

Flavor and Soul by:John Gennari
In the United States, African American and Italian cultures have been intertwined for more than a hundred years. From as early as nineteenth-century African American opera star Thomas Bowers—“The Colored Mario”—all the way to hip-hop entrepreneur Puff Daddy dubbing himself “the Black Sinatra,” the affinity between black and Italian cultures runs deep and wide. Once you start looking, you’ll find these connections everywhere. Sinatra croons bel canto over the limousine swing of the Count Basie band. Snoop Dogg deftly tosses off the line “I’m Lucky Luciano ’bout to sing soprano.” Like the Brooklyn pizzeria and candy store in Spike Lee’s Do the Right Thing and Jungle Fever, or the basketball sidelines where Italian American coaches Rick Pitino and John Calipari mix it up with their African American players, black/Italian connections are a thing to behold—and to investigate.

In Flavor and Soul, John Gennari spotlights this affinity, calling it “the edge”—now smooth, sometimes serrated—between Italian American and African American culture. He argues that the edge is a space of mutual emulation and suspicion, a joyous cultural meeting sometimes darkened by violent collision. Through studies of music and sound, film and media, sports and foodways, Gennari shows how an Afro-Italian sensibility has nourished and vitalized American culture writ large, even as Italian Americans and African Americans have fought each other for urban space, recognition of overlapping histories of suffering and exclusion, and political and personal rispetto.

Thus, Flavor and Soul is a cultural contact zone—a piazza where people express deep feelings of joy and pleasure, wariness and distrust, amity and enmity. And it is only at such cultural edges, Gennari argues, that America can come to truly understand its racial and ethnic dynamics.
Release: 3/8/17
Click to purchase: (Hardcover) 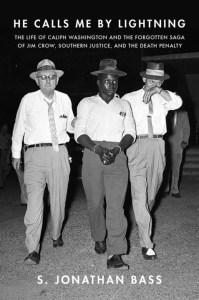 He Calls Me By Lightning by:S. Jonathan Bass
A heroic reconstruction of the forgotten life of a wrongfully convicted man whose story becomes an historic portrait of the Jim Crow South.

Caliph Washington’s life was never supposed to matter. As a black teenager from the vice-ridden city of Bessemer, Alabama, Washington was wrongfully convicted of killing an Alabama policeman in 1957. Sentenced to death, he came within minutes of the electric chair—nearly a dozen times. A Kafka-esque legal odyssey in which Washington’s original conviction was overturned three times before he was finally released in 1972, his story is the kind that pervades the history of American justice. Here, in the hands of historian S. Jonathan Bass, Washington’s ordeal and life are rescued from anonymity and become a moving parable of one man’s survival and perseverance in a hellish system.

He Calls Me by Lightning is both a compelling legal drama and a fierce depiction of the Jim Crow South that forces us to take account of the lives cast away by systemic racism.
Kindle Release: 3/7/17
Hardcover Release: 5/2/17
Click to purchase: (Kindle), (Hardcover), (Audio CD)

Dear Ijeawele, or A Feminist Manifesto in Fifteen Suggestions by:Chimamanda Ngozi Adichie
From the best-selling author of Americanah and We Should All Be Feminists comes a powerful new statement about feminism today–written as a letter to a friend.

A few years ago, Chimamanda Ngozi Adichie received a letter from a dear friend from childhood, asking her how to raise her baby girl as a feminist. Dear Ijeawele is Adichie’s letter of response.

Here are fifteen invaluable suggestions–compelling, direct, wryly funny, and perceptive–for how to empower a daughter to become a strong, independent woman. From encouraging her to choose a helicopter, and not only a doll, as a toy if she so desires; having open conversations with her about clothes, makeup, and sexuality; debunking the myth that women are somehow biologically arranged to be in the kitchen making dinner, and that men can “allow” women to have full careers, Dear Ijeawele goes right to the heart of sexual politics in the twenty-first century. It will start a new and urgently needed conversation about what it really means to be a woman today.
Release: 3/7/17
Click to purchase: (Kindle), (Hardcover), (Audio CD)