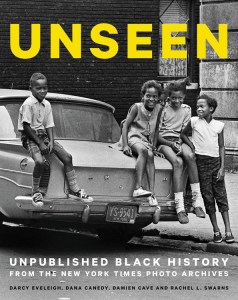 Hundreds of stunning images from black history have long been buried in the New York Times archives. None of them were published by the Times–until now. Unseen uncovers these never-before published photographs and investigates the stories behind them.

In February 2016, Darcy Eveleigh, Dana Canedy, Damien Cave, and Rachel Swarms discovered dozens of photographs–and explored the history behind them–and chronicled them in the popular blog series Unpublished Black History. This book dives even deeper in the Times photo archives–known as the Morgue–to showcase 120 more photographs and their untold stories.

The month-long series was overwhelmingly well-received and garnered 1.7 million views and thousands of comments from readers. The never-before-published photographs include a 27-year-old Jesse Jackson leading a rally of 4,000 people in Chicago, Rosa Parks arriving at a Montgomery Courthouse, and a candid behind-the-scenes shot of Aretha Franklin backstage at the Apollo Theater.

Were the photos–or the people in them–not deemed newsworthy enough? Did the images not arrive in time for publication? Were they pushed aside by words at an institution long known as the Gray Lady? Eveleigh, Canedy, Cave, and Swarms explore all these questions and more in this one-of-a-kind book.
Release: 10/17/17
Click to purchase: (Kindle) or (Hardcover)