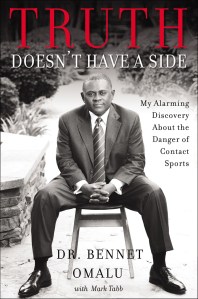 Truth Doesn’t Have a Side: My Alarming Discovery about the Danger of Contact Sports by:Bennet Omalu
One day in 2002 the fifty-year old body of former Pittsburgh Steeler and hall of famer Mike Webster was laid on a cold table in front of pathologist Dr. Bennet Omalu. Webster’s body looked to Omalu like the body of a much older man, and the circumstances of his behavior prior to his death were clouded in mystery. But when Omalu cut into Webster’s brain, it appeared to be normal. Something didn’t add up.

It was at this moment, Omalu studying slides of Webster’s brain tissue under a microscope, that the world of contact sports would never be the same: the discovery of Chronic Traumatic Encephalopathy. CTE can result in an array of devastating consequences including deterioration in attention, memory loss, social instability, depression, and even suicide. And Omalu’s discovery of CTE in the brain of an American football player has become the catalyst of a blazing controversy across all contact sports.

At the center of that controversy stands the unlikely Dr. Bennet Omalu, a Nigerian-born American citizen, a mild-mannered, gentle man of faith. It is fascinating that it would take someone on the outside of American culture to make this amazing discovery, and refuse to let it be kept hidden. Dr. Omalu began his life in strife, growing up in war-torn Nigeria. But his medical studies in forensic pathology proved to be a lifeline. It fed his natural curiosity and awakened within a deeper desire to always search for the truth. Who would have thought that such an unexpected character would play such a role in bringing to life this world-changing data?

In Truth Doesn’t Have a Side, discover the truth about CTE: Its causes and symptoms, how we might keep our children safe and guide professional athletes when CTE sets in. The problem of CTE is coming to light with each new story about an athlete’s concussion problem, and we are likely facing dramatic changes to professional sports. You’ll be inspired by Dr. Bennet Omalu a man driven by his love and concern for the welfare of all people, and his professional vow to speak the truth.
Release: 8/8/17
Click to purchase: (Kindle), (Hardcover), (MP3 CD)

Playing Hurt: My Journey from Despair to Hope by:John Saunders
For the first time ever, the popular late host of ESPN’s The Sports Reporters and ABC’s college football openly discusses a lifelong battle with depression.

During his three decades on ESPN and ABC, John Saunders became one of the nation’s most respected and beloved sportscasters. In this moving, jarring, and ultimately inspiring memoir, Saunders discusses his troubled childhood, the traumatic brain injury he suffered in 2011, and the severe depression that nearly cost him his life. As Saunders writes, Playing Hurt is not an autobiography of a sports celebrity but a memoir of a man facing his own mental illness, and emerging better off for the effort. I will take you into the heart of my struggle with depression, including insights into some of its causes, its consequences, and its treatments.

I invite you behind the facade of my apparently “perfect” life as a sportscaster, with a wonderful wife and two healthy, happy adult daughters. I have a lot to be thankful for, and I am truly grateful. But none of these things can protect me or anyone else from the disease of depression and its potentially lethal effects.

Mine is a rare story: that of a black man in the sports industry openly grappling with depression. I will share the good, the bad, and the ugly, including the lengths I’ve gone to to conceal my private life from the public.

So why write a book? Because I want to end the pain and heartache that comes from leading a double life. I also want to reach out to the millions of people, especially men, who think they’re alone and can’t ask for help.

John Saunders died suddenly on August 10 ,2016, from an enlarged heart, diabetes, and other complications. This book is his ultimate act of generosity to help those who suffer from mental illness, and those who love them.
Release: 8/8/17
Click to purchase: (Kindle), (Hardcover), (Audible) 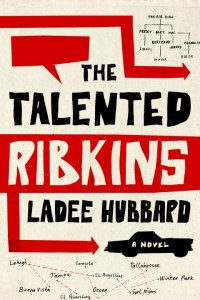 The Talented Ribkins by:Ladee Hubbard
2016 winner of the Rona Jaffe Foundation Writer’s Award and riffing off W.E.B. Du Bois’ famous essay, this marvelously inventive novel tells the story of Johnny Ribkins, a 72-year old African-American antiques dealer from Florida who was born with a unique talent.

A compulsively readable, big-hearted story about a family with special gifts who sometimes stumble in their efforts to succeed in life, The Talented Ribkins draws on such novels as Toni Morrison’s Sula and Colson Whitehead’s The Intuitionist to weave themes of race, class and politics into a wonderfully accomplished and engaging novel by a talented new author.
Release: 8/8/17
Click to picture: (Kindle) or (Hardcover)

Dust of The Zulu by:Louise Meintjes
In Dust of the Zulu Louise Meintjes traces the political and aesthetic significance of ngoma, a competitive form of dance and music that emerged out of the legacies of colonialism and apartheid in South Africa. Contextualizing ngoma within South Africa’s history of violence, migrant labor, the HIV epidemic, and the world music market, Meintjes follows a community ngoma team and its professional subgroup during the twenty years after apartheid’s end. She intricately ties aesthetics to politics, embodiment to the voice, and masculine anger to eloquence and virtuosity, relating the visceral experience of ngoma performances as they embody the expanse of South African history. Meintjes also shows how ngoma helps build community, cultivate responsible manhood, and provide its participants with a means to reconcile South Africa’s past with its postapartheid future. Dust of the Zulu includes over one hundred photographs of ngoma performances, the majority taken by award-winning photojournalist TJ Lemon.
Release: 8/11/17
Click to purchase: (Hardcover), (Paperback), (Kindle)

Time passes slowly in here, just you and me. It must be lunchtime.

He will let us out soon.

The kennel has been JC’s and his dog Boy’s home, ever since JC’s new foster father locked them inside.

They share food and water when they can get it, play, and talk. JC tells Boy about how he came to his country and his chaotic life beforehand: his family; the orphanage; the hurricane that swept everything away.He also tells him about when everything changed: his foster mother Melanie brought a new light into his life and brought him to her home country.

That was before JC and Boy did something bad, something very bad. Just before their punishment, just before the kennel. Now their Foster Father is getting sicker, Melody still isn’t home, and JC and Boy realize that they have to try and escape.
Kindle Release: 7/6/17
Release: 8/8/17
Ages: 12 to 18
Click to purchase: (Kindle) or (Paperback)