The year is 1978, the Duncan brothers and their tough-as-nails women have vanquished their rivals and taken their place as the leaders of Waycross, Georgia’s criminal enterprises. However, their rise to power has not gone unnoticed, and the family is rocked when their mother, Ms. Bettie, is kidnapped and her body is found in a swamp.

No one knows who the killers are, but instead of drawing closer, the family is split when their grief-stricken leader, LC, is offered membership in the South’s most powerful black organization, the Council. Membership has its privileges, but they do not include his brothers. LC packs up his growing family and moves to Atlanta to open his first car dealership.

Unable to deal with his mother’s death, Lou Duncan searches for her killers with the help of an unlikely ally—LC’s ex-fiancée. Her presence may cost him his relationship with his brothers, but Lou is resigned to that fact because Donna’s help is instrumental in finding Ms. Bettie’s abductors. What he will soon learn is that his search for the truth will also lead him to discover a long-buried Duncan family secret.
Release: 8/29/17
Click to purchase: (Kindle) or (Hardcover) 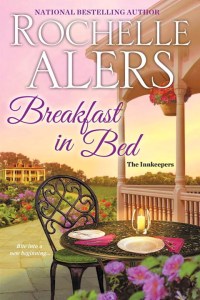 Sometimes you go in search of a new beginning. Other times, it finds you. Tonya Martin enjoys her job as a professional chef for a Wall Street bank, her East Harlem walk-up, and the freedom to live and love by her own rules—right up until the day she finds herself suddenly downsized. But a spontaneous trip to New Orleans opens up a new opportunity. With time on her hands and her daughter soon graduating college, Tonya has the chance to reach for her own long-cherished dream—opening a restaurant on her friend Hannah’s beautiful Garden District estate.

While Hannah and her new husband work on transforming the DuPont House into a luxury inn, Tonya explores local cuisine, taking an apprentice role at famed restaurant Chez Toussaints. Gage Toussaint’s mix of Creole, Cajun, and African ancestry is deeply attractive, and the sexy chef clearly wants their friendship to become much more. Drawn to him yet hesitant given their previous unhappy marriages, Tonya wonders if it’s too late to leap into love again. Could Gage be just the ingredient she needs to make this delicious new life complete?
Release: 8/29/17
Click to purchase: (Kindle) or (Paperback) 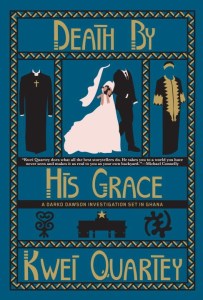 Death By His Grace by:Kwei Quartey
Katherine Yeboah’s marriage to Solomon Vanderpuye is all the talk of Accra high society. But when it becomes apparent that Katherine is infertile, Solomon’s extended family accuses her of being a witch, hounding her until the relationship is so soured Solomon feels compelled to order Katherine out of the house they shared. Alone on her last night there, Katherine is brutally murdered by an intruder wielding a machete.

Chief Inspector Darko Dawson of the Ghanaian federal police has personal as well as professional reasons to find the killer fast: Katherine was the first cousin of his wife, Christine, who is devastated by the tragedy. As Darko investigates, he discovers that many people close to Katherine had powerful motives to kill her, including: Solomon, her husband; James Bentsi-Enchill, her lawyer and ex-lover; and her filthy rich pastor, Bishop Clem Howard-Mills. In order to expose the truth, Darko must confront the pivotal role religion plays in Ghana—and wrestle with his old demons the investigation stirs up.
Release: 8/29/17
Click to purchase: (Kindle) or (Hardcover)

Leila Darling is past done with the supermodel thing, especially the mega-parties and high-profile flings that have done nothing but leave her alone and jaded. She’s got the talent to be a serious actress, but the industry sees her as a high-maintenance, impulsive party girl with a reputation for leaving men in the dust—especially TV producer Carter Bain.

Carter’s had his eye on Leila for years, so when a bet gives him a chance to get close to her, he accepts. With the goal of getting Leila the image makeover she needs and Carter the star he desires, the game is on. Get married and stay married for six months. If Leila lasts, she gets her pick of his A-list roles. If Carter wins, she’ll take the hot sidekick part he’s offered.

But as their “I do” turns up all kinds of heat, Leila and Carter find they have more in common than they ever imagined. Are these two prepared to put business aside and surrender the ultimate prize, their hearts?
Release: 8/29/17
Click to purchase: (Kindle) or (Mass Market Paperback) 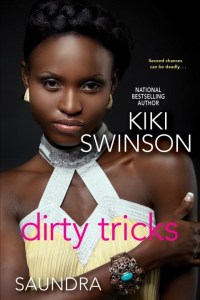 Karlie Houston is broke, betrayed—and running from a bounty on her head. Turns out the real owners of the payday loan office she ripped off weren’t cool with her idea of employment bennies. With her lover and friends gone, she’s forced to take refuge with her cold-hearted grandmother. But with enemies closing in, Karlie’s last chance to flip a killer script is ticking down to slim, none—and dead.

WHO CAN YOU TRUST?
SAUNDRA

Struggling bank teller Porsha has no time for Cinderella fantasies. She’s working overtime to keep her tragedy-struck family off the streets. But her new boyfriend, Game, is smart, seductive—and sure-thing successful. So why not work his rock-solid plan to steal from her bank? All she’s got to lose is more than she can possibly imagine.
Release: 8/29/17
Click to purchase: (Kindle) or (Paperback)

Beating the Odds by:Sherrod Tunstall
Brad Carter is down on his luck. He loses his job, catches his woman in bed with another man, and he’s days away from being booted out of his home. Wanting to get away from his problems, Brad and his boys go to a nightclub, where they meet a wealthy stranger who offers them each $50,000 to go to Rio de Janeiro and traffic cocaine back to the U.S.

They jump at the opportunity and have the time of their lives in Rio, but when it’s time to return to the U.S. with the drugs, all hell breaks loose. Brad and his friends are caught, and being in jail is not anything they could have imagined. With the help of a fellow prisoner with powerful connections, they plan an escape.

Brad is determined to find his way back to the U.S., but not without Diamond, the beautiful woman he met before things went awry in Rio. Can he rescue her from the clutches of Armand, the sick crime boss who’s been holding her captive for years? He soon discovers that the web of criminal connections between Armand, his wife, and his associates are deep and dangerous. With the obstacles he faces, Brad’s journey to freedom may be impossible.
Release: 8/29/17
Click to purchase: (Kindle) or (Paperback)

Definition of a Bad Girl by:MiChaune
Leshaun is the true definition of a bad girl, who goes from corporate to hood and back again with ease. While she lets others think that she’s just one of a team, those who truly know her understand that she run the streets all by herself. Let Leshaun tell it, a big girl can be the whore, the pimp, and the broad that owns the sleazy hotel all at the same time. The issue is that others need to respect her gangster. When someone has the balls to burn her hotel to the ground and pick off her whores one by one, Leshaun will have to fight this battle with every ounce of strength she has. She is the definition of a bad girl, and the next time you see her, it will be in the dictionary next to “get rich or die trying.” Sometimes, the king of the streets isn’t a king at all.
Release: 8/29/17
Click to purchase: (Kindle) or (Paperback) 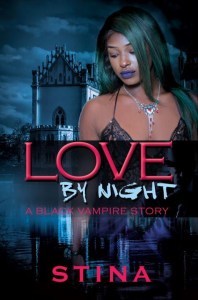 Love by Night: A Black Vampire Story by:Stina
Against all odds, Adirah Messa has been accepted to Billet University, a prestigious institution founded in the 1800s for people of color. Determined to excel, she arrives at the university intent on minimizing distraction and focusing on her studies. That goal is soon interrupted when she is noticed by members of the “in” crowd, who invite her to the most popular frat party on campus.

Adirah finds herself smitten with someone of another race and is taken on a ride she can never return from. Unbeknownst to her, Adirah’s newfound love is not only a master seducer; he is also one of the most powerful figures in the underworld of Vampirism. Tangled up in a web of love, Adirah becomes involved in her lover’s lifestyle in more ways than one.

Before she knows it, Adirah becomes Queen to his tribe. Is she prepared to accept all the responsibility that entails? When a rival clan targets Adirah and her identity is exposed, she must make some quick and serious decisions. Will she react in time, or is it already too late?
Release: 8/29/17
Click to purchase: (Kindle), (Paperback), (Mass Market Paperback)

Secrets of a Kept Chick, Part 2 by:Ambria Davis
Amina “Mimi” Washington thought she had life all figured out when she moved to Atlanta and got the family and the material things she’d always dreamed of. But when things took a turn for the worse, Mimi ended up in big trouble.

Now she has come out of a coma and finds herself in a hospital bed, with no recollection of how she got there. When she discovers what happened to her, will she be able to handle the truth?

Troy’s busy searching the streets for Kaylin and the children, with Mark and Jayden’s help. They search all over, but with no luck. In desperation, she decides to call on an old friend for help, but she soon regrets it. Sometimes past memories should remain hidden, especially when emotions are involved.

Kaylin thinks he’s home free, but Georgia’s finest is looking for him. To top that off, Stacy’s constantly complaining, and it is about to drive him insane. Will all this push him to his breaking point?

Secrets reveal themselves, and lies are exposed. Follow the crew as they take you on one hell of a journey again!
Release: 8/29/17
Click to purchase: (Kindle) or (Paperback)

First Love Second Chance by:Chante Rand
Nine years ago, wide receiver and notorious playboy, Colt Emerson, walked away from marriage to the only woman he ever loved. A chance encounter with a runaway teen convinces him there’s more to life than his own selfish needs. But Social Services won’t consider him an acceptable candidate to adopt the kid unless he can provide a stable family environment, and Colt only trusts one woman to handle the job—his ex-wife, Shayla. Shayla Carter has fought feelings of anger and grief every time she sees her celebrity ex-husband on TV with some new bimbo draped on his arm. When he shows up out of the blue with a Texas-sized solitaire diamond and a promise to do right by her, she gives him a reception like hell froze over. But Colt agrees to her long list of demands, and now Shayla can’t help but wonder if it’s time to give her first love a second chance.
Release: 9/1/17
Click to purchase: (Kindle) or (Paperback)