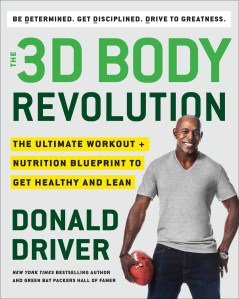 Beloved, record-setting wide receiver for the Green Bay Packers Donald Driver retired in 2012 and since then has won Dancing with the Stars (2012) and written a bestselling memoir, Driven. Known for his power on the field, he took a break from his intense workouts after retiring–and found himself sluggish and unhappy.

He took it upon himself to get back into the best shape of his life–and along the way has become THE go-to guy for training other pro athletes as well as regular people just looking for a great workout at his Dallas gym Driven Elite Fitness and Health Center. With his trademark motivational energy and charisma, he now he shares his 3D’s: the determination to eat for weight loss; the discipline to achieve high-intensity, muscle-building workout; and the drive to push yourself to your best. Whatever your starting level, you’ll be pushed to your personal best by this intense workout blueprint, with targeted nutritional and motivational advice for each of its 3 levels. Filled with insights and insider stories from his life on and off the field, Driver also offers a clean eating plan with 25 recipes targeted to caloric needs as well as 50 photos of him demonstrating the exercises. This is your path to peak performance and phenomenal fitness.

Be Determined. Get Disciplined. Drive to Greatness.
Release: 9/19/17
Click to purchase: (Kindle) or (Hardcover)

The Memo by:John Hope Bryant
At long last, John Hope Bryant lays out five simple rules to provide a path to economic liberation for anyone in any situation. The Memo provides a simple path from financial literacy and mindset shifts to ownership, positive relationships, and a completely new attitude toward money. In a provocative exploration of the intersections of race and class, Bryant preaches the definitive conclusion that to be free, one must be economically liberated. Readers will learn how to achieve economic power in the following chapters:

• We Live in a Free Enterprise System—Embrace This
• Your Mindset Makes or Loses You Money and Wealth
• Your Relationships Are Your Investments—Your Most Important Relationship Is with Yourself
• Don’t “Get a Job”—Create Value. You ARE Capital.
• Spiritual Capital Is the Start of True Wealth

Those who suffer from poverty haven’t gotten “the memo”—until now. For decades, John Hope Bryant has reached out to the underserved in our “free enterprise” system. Through Operation HOPE, he has reached tens of thousands of people. In this work, he’s found that most problems that stem from racism are directly linked to economic slavery. The five rules are spelled out clearly: readers must embrace the “free” in free enterprise, shift their mindset, build relationships, switch from working a job to actively creating value from within, and realize that they can never be truly wealthy without hope.
Release: 9/18/17
Click to purchase: (Kindle), (Hardcover), (Audiobook), (Audio CD)

The Autobiography of Gucci Mane by:Gucci Mane
The highly anticipated memoir from Gucci Mane, “one of hip-hop’s most prolific and admired artists” (The New York Times).

For the first time Gucci Mane tells his story in his own words. It is the captivating life of an artist who forged an unlikely path to stardom and personal rebirth. Gucci Mane began writing his memoir in a maximum-security federal prison. Released in 2016, he emerged radically transformed. He was sober, smiling, focused, and positive—a far cry from the Gucci Mane of years past.

Born in rural Bessemer, Alabama, Radric Delantic Davis became Gucci Mane in East Atlanta, where the rap scene is as vibrant as the dope game. His name was made as a drug dealer first, rapper second. His influential mixtapes and street anthems pioneered the sound of trap music. He inspired and mentored a new generation of artists and producers: Migos, Young Thug, Nicki Minaj, Zaytoven, Mike Will Made-It, Metro Boomin.

Yet every success was followed by setback. Too often, his erratic behavior threatened to end it all. Incarceration, violence, rap beefs, drug addiction. But Gucci Mane has changed, and he’s decided to tell his story.

In his extraordinary autobiography, the legend takes us to his roots in Alabama, the streets of East Atlanta, the trap house, and the studio where he found his voice as a peerless rapper. He reflects on his inimitable career and in the process confronts his dark past—years behind bars, the murder charge, drug addiction, career highs and lows—the making of a trap god. It is one of the greatest comeback stories in the history of music.

The Autobiography of Gucci Mane is a blunt and candid account—an instant classic.
Release: 9/19/17
Click to purchase: (Kindle), (Hardcover), (Audiobook)

Nothing fires up Elias Bradley’s adrenaline like the risk of thrilling adventure. But when a serious wrist injury threatens both the Miami trauma surgeon’s career and coveted promotion, he heads down to his family’s island retreat to relax and regroup. At a bar, he meets a woman who awakens extreme emotions that take him by surprise. Even after they part ways following their passionate twilight tryst, Elias longs to connect with Dr. Cricket Warren on a deeper, more intimate level.

Heiress to a billion-dollar tech fortune, Cricket has two PhDs but zero experience when it comes to the opposite sex. So when she spends her vacation back home on Hideaway Island sharing the bed of a sexy stranger, she’s caught off guard by their sizzling attraction. And now she’s having Elias’s baby… He’s ready to step up and do the right thing but they barely know each other. Together, can they turn a moonlit fantasy into a lifetime of romance?
Release: 9/19/17
Click to purchase: (Mass Market Paperback) or (Kindle) 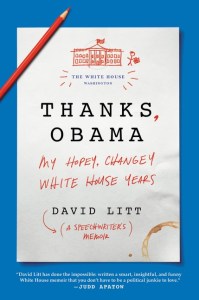 Thanks, Obama: My Hopey, Changey White House Years by:David Litt
Remember when presidents spoke in complete sentences instead of in unhinged tweets? Former Obama speechwriter David Litt does. In his comic, coming-of-age memoir, he takes us back to the Obama years – and charts a path forward in the age of Trump.

More than any other presidency, Barack Obama’s eight years in the White House were defined by young people – twenty-somethings who didn’t have much experience in politics (or anything else, for that matter), yet suddenly found themselves in the most high-stakes office building on earth. David Litt was one of those twenty-somethings. After graduating from college in 2008, he went straight to the Obama campaign. In 2011, he became one of the youngest White House speechwriters in history. Until leaving the White House in 2016, he wrote on topics from healthcare to climate change to criminal justice reform. As President Obama’s go-to comedy writer, he also took the lead on the White House Correspondents’ Dinner, the so-called “State of the Union of jokes.”

Now, in this refreshingly honest memoir, Litt brings us inside Obamaworld. With a humorists’ eye for detail, he describes what it’s like to accidentally trigger an international incident or nearly set a president’s hair aflame. He answers questions you never knew you had: Which White House men’s room is the classiest? What do you do when the commander in chief gets your name wrong? Where should you never, under any circumstances, change clothes on Air Force One? With nearly a decade of stories to tell, Litt makes clear that politics is completely, hopelessly absurd.

But it’s also important. For all the moments of chaos, frustration, and yes, disillusionment, Litt remains a believer in the words that first drew him to the Obama campaign: “People who love this country can change it.” In telling his own story, Litt sheds fresh light on his former boss’s legacy. And he argues that, despite the current political climate, the politics championed by Barack Obama will outlive the presidency of Donald Trump.

Full of hilarious stories and told in a truly original voice, Thanks, Obama is an exciting debut about what it means – personally, professionally, and politically – to grow up.
Release: 9/19/17
Click to purchase: (Kindle), (Hardcover), (Audiobook), (Audio CD)

The Heat Between Us by:Cheris Hodges
Love’s sweet refrain?

Appointed to head Atlanta’s first-ever jazz festival, go-to marketing guru Michael “MJ” Jane sets out to create an annual event to rival New Orleans. Even if that means hiring her irresistible crush Jamal Carver to run security… The former marine with the killer smile and amazing abs also happens to be her best friend’s husband’s confidant. But despite their sizzling attraction, she refuses to become the playboy’s latest conquest.

The driven, desirable bachelorette makes the decorated marine long to hang up his own bachelor status. It’s getting harder for Jamal to keep things strictly business between them—can’t MJ see they’re creating a passionate tune of their own? Just as Jamal starts to earn MJ’s trust, their relationship is threatened by a relentless, still-in-the-picture ex-girlfriend. Will a downbeat melody end their romance before it truly begins? Or can love keep Jamal and MJ in harmony…forever?
Release: 9/19/17
Click to purchase: (Mass Market Paperback) or (Kindle)

Flirting with a gorgeous stranger at the bar is how Lorraine Mitchell celebrates her longed-for newly single status. One-night stands usually run hot and wild before quickly flaming out, but Lorraine cannot forget her heated encounter with firefighter Hunter Holland. Weeks later, she is beyond surprised to discover that his father—a former patient of hers—has left her a large bequest!

Last time Hunter was in the same room as Lorraine, they were burning up the sheets. Now he’s staring at her from across a lawyer’s office. At first, guilt and grief convince him that the beautiful nurse took advantage of his long-estranged father. Yet despite mutual mistrust, he knows this kind of chemistry only comes around once in a lifetime. And reviving their spark just might ignite a love that’s as deep and true as it is scorching…
Release: 9/19/17
Click to purchase: (Mass Market Paperback) or (Kindle) 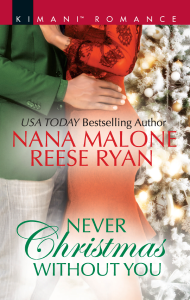 Never Christmas Without You: Just for the Holidays\His Holiday Gift by: Nana Malone and Reese Ryan
All you need this Christmas are these sizzling stories full of love and a touch of holiday magic…

Just for the Holidays by Nana Malone

Justin Morrison would do anything to make his ailing grandmother happy. Even if that means inventing a fake girlfriend to take home for the holidays. His best friend, Alex Winters, reluctantly agrees, but it’s not easy to keep her long-buried feelings for Justin under wraps when they’re sharing a room…a bed…a kiss. Christmas in Catalina is turning out to be hotter than anyone expected, but is theirs a love for all seasons?

His Holiday Gift by Reese Ryan

Pleasure Cove’s prodigal son just got the ultimate Christmas surprise—Madison, his five-year-old daughter he knew nothing about. Maddie’s aunt, Mikayla Mitchell, was once one of Dash Williams’s best friends…and his secret admirer. Now, seeing the sexy, ambitious lawyer with his little girl, Mikayla’s more smitten than ever. And Dash is starting to realize Mikayla’s the only one who could make his days merry and bright, and fill his nights with bliss…
Release: 9/19/17
Click to purchase: (Mass Market Paperback) or (Kindle)