On The Other Side of Freedom by:DeRay McKesson
From the internationally recognized civil rights activist/organizer and host of the podcast Pod Save the People, a meditation on resistance, justice, and freedom, and an intimate portrait of a movement from the front lines.

In August of 2014, twenty-nine-year-old activist DeRay Mckesson stood with hundreds of others on the streets of Ferguson, Missouri, to push a message of justice and accountability. These protests, and others like them in cities across the country, resulted in the birth of the Black Lives Matter movement. Now, in his first book, Mckesson lays out the intellectual, pragmatic political framework for a new liberation movement. Continuing a conversation about activism, resistance, and justice that embraces our nation’s complex history, he dissects how deliberate oppression persists, how racial injustice strips our lives of promise, and how technology has added a new dimension to mass action and social change. He argues that our best efforts to combat injustice have been stunted by the belief that racism’s wounds are history, and suggests that intellectual purity has curtailed optimistic realism. The book offers a new framework and language for understanding the nature of oppression. With it, we can begin charting a course to dismantle the obvious and subtle structures that limit freedom.

Honest, courageous, and imaginative, On the Other Side of Freedom is a work brimming with hope. Drawing from his own experiences as an activist, organizer, educator, and public official, Mckesson exhorts all Americans to work to dismantle the legacy of racism and to imagine the best of what is possible. Honoring the voices of a new generation of activists, On the Other Side of Freedom is a visionary’s call to take responsibility for imagining, and then building, the world we want to live in.
Release: 9/4/18
Get the Book: (Kindle) or (Hardcover)

At twelve years old, Cornelius, the son of an Italian-American woman and an older black man from Mississippi named Herman, secretly takes over his father’s job at a silent film theater in New York’s East Village. Five years later, as Herman lives out his last days, he shares his wisdom with his son, explaining that the person who controls the narrative of history controls their own fate. After his father dies and his mother disappears, Cornelius sets about reinventing himself―as Professor John Woman, a man who will spread Herman’s teachings into the classrooms of his unorthodox southwestern university and beyond. But there are other individuals who are attempting to influence the narrative of John Woman, and who might know something about the facts of his hidden past.

Engaging with some of the most provocative ideas of recent intellectual history, John Woman is a compulsively readable, deliciously unexpected novel about the way we tell stories, and whether the stories we tell have the power to change the world.
Release: 9/4/18
Click to purchase: (Kindle) or (Hardcover) 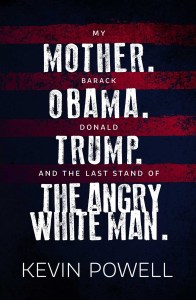 My Mother. Barack Obama. Donald Trump. And the Last Stand of the Angry White Man. by:Kevin Powell
Written in the tradition of works by Joan Didion, bell hooks, Toni Morrison, and Eve Ensler, a provocative and soul-searching “autobiography of America”—the past, the present, and the future Kevin Powell wants for us all, through the lens and lives of three major figures: his mother, Barack Obama, and Donald Trump.

Ten short years ago, Barack Obama became president of the United States, and changed the course of history. Ten short years ago, our America was hailed globally as a breathtaking example of democracy, as a rainbow coalition of everyday people marching to the same drum beat. We had finally overcome.

Both the presidencies of Obama and Donald Trump have produced some of the ugliest divides in history: horrific racial murders, non-stop mass shootings, the explosion of attacks on immigrants and on the LGBTQ community, the rise of anti-Semitism and Islamophobia, a massive gap between the haves and the have-nots, and legions of women stepping forth to challenge sexual violence—and men—in all forms.

In this gripping new collection of thirteen essays, My Mother. Barack Obama. Donald Trump. And the Last Stand of the Angry White Man., Kevin Powell interweaves brutally honest personal stories with the saga of America, then and now. Be it politics, sports, pop culture, hip-hop music, mental health, racism, #MeToo, or his very complicated relationship with his mother, these impassioned essays are not merely a mirror of who we are, but also who and what Powell thinks we ought to be.
Release: 9/4/18
Get the Book: (Kindle) or (Hardcover) 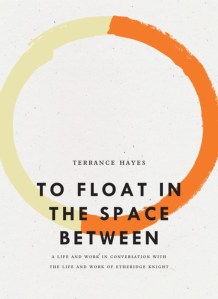 To Float In The Space Between by:Terrance Hayes
“Hayes leaves resonance cleaving the air.” ―NPR

In these works based on his Bagley Wright lectures on the poet Etheridge Knight, Terrance Hayes offers not quite a biography but a compilation “as speculative, motley, and adrift as Knight himself.” Personal yet investigative, poetic yet scholarly, this multi-genre collection of writings and drawings enacts one poet’s search for another and in doing so constellates a powerful vision of black literature and art in America.

The future Etheridge Knight biographer will simultaneously write an autobiography. Fathers who go missing and fathers who are distant will become the bones of the stories.

There will be a fable about a giant who grew too tall to be kissed by his father. My father must have kissed me when I was boy. I can’t really say. . . . By the time I was eleven or even ten years old I was as tall as him. I was six inches taller than him by the time I was fifteen. My biography about Knight would be about intimacy, heartache.

Terrance Hayes is the author of How to Be Drawn, which received a 2016 NAACP Image Award for Poetry; Lighthead, which won the 2010 National Book Award for poetry; and three other award-winning poetry collections. He is the poetry editor at the New York Times Magazine and also teaches at the University y of Pittsburgh. American Sonnets for My Past and Future Assassin will also be forthcoming in 2018.
Release: 9/4/18
Get the Book: (Paperback) 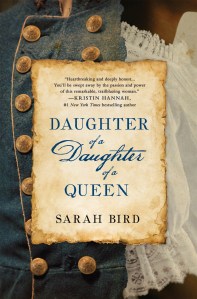 Daughter of a Daughter of a Queen by:Sarah Bird
The compelling, hidden story of Cathy Williams, a former slave and the only woman to ever serve with the legendary Buffalo Soldiers.

“Here’s the first thing you need to know about Miss Cathy Williams: I am the daughter of a daughter of queen and my mama never let me forget it.”

Though born into bondage on a “miserable tobacco farm” in Little Dixie, Missouri, Cathy Williams was never allowed to considered herself a slave. According to her mother, she was a captive, bound by her noble warrior blood to escape the enemy. Her means of deliverance is Union general Phillip Henry “Smash ‘em Up” Sheridan, the outcast of West Point who takes the rawboned, prideful young woman into service. At war’s end, having tasted freedom, Cathy refuses to return to servitude and makes the monumental decision to disguise herself as a man and join the Army’s legendary Buffalo Soldiers.

Alone now in the ultimate man’s world, Cathy must fight not only for her survival and freedom, but she vows to never give up on finding her mother, her little sister, and the love of the only man strong and noble enough to win her heart. Inspired by the stunning, true story of Private Williams, this American heroine comes to vivid life in a sweeping and magnificent tale about one woman’s fight for respect and independence.

Christina Baker Kline says Daughter of a Daughter of a Queen is “an epic page-turner” and “unforgettable.”
Release: 9/4/18
Get the Book: (Kindle) or (Hardcover)

Tight by:Torrey Maldonado
A tween boy from the projects gets all wound up when he’s constantly told he needs to be “hard” when he’d rather go with the flow and stay chill.

Bryan’s mom has always encouraged his quiet, thoughtful nature, but his dad is different. He thinks it’s time for the sixth-grader to toughen up. With a quick temper and recently out of jail on probation, he tells Bryan it’s better for a man to be feared than to be liked.

Bryan’s not really sure about this, and it doesn’t seem to even matter when he befriends new kid Mike. At first everything is calm and chill, the way Bryan likes it, as the boys bond over their love of reading comics and drawing superheroes. But things get uncomfortable when it turns out Mike has some risky ideas about how to have fun. Then Bryan’s dad gets in a fight and ends up back in jail, and something in Bryan snaps. He starts cutting school, jumping subway turnstiles and going train surfing, with Mike in the lead. But when Mike takes things a step too far and shows his true colors, Bryan has a difficult decision to make.
Release: 9/4/18
Click to purchase: (Kindle) or (Hardcover)

One creative boy.
One bare, abandoned wall.
One BIG idea.

There is a wall in Ángel’s neighborhood. Around it, the community bustles with life: music, dancing, laughing. Not the wall. It is bleak. One boy decides to change that. But he can’t do it alone.

Told in elegant verse by Susan Verde and vibrantly illustrated by John Parra, this inspiring picture book celebrates the power of art to tell a story and bring a community together.
Release: 9/4/18
Ages: 4 to 8, Grades: P to 3
Get the Book: (Kindle) or (Hardcover)

When Lisa takes Corduroy to the theater for the very first time, it’s so magnificent and exciting that he just can’t help heading out on his own to explore. From the orchestra pit to the prop table to the dressing rooms, Corduroy sees it all. Could there be a place for Corduroy on stage, too?

Fifty years after this lovable, inquisitive teddy bear was first introduced to readers, he’s now the star of the show. Author Viola Davis uses her own experience as an Emmy, Tony, and Oscar Award-winning actress to imbue Corduroy’s adventure with all the magic of the stage. A beautifully illustrated tale with a classic feel, Corduroy Takes a Bow is sure to spark an interest in theater in children of any age.
Release: 9/4/18
Ages: 3 to 5, Grades: K And Under
Get the Book: (Hardcover) or (Audiobook) 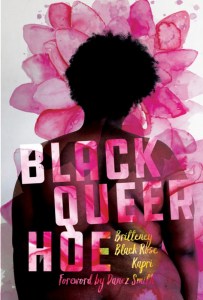 Women’s sexuality is often used as a weapon against them. In this powerful debut, Britteney Black Rose Kapri lends her unmistakable voice to fraught questions of identity, sexuality, reclamation, and power, in a world that refuses Black Queer women permission to define their own lives and boundaries.

Britteney Black Rose Kapri is a Chicago performance poet and playwright. Currently she is an alumna turned Teaching Artist Fellow at Young Chicago Authors. Her work has been featured in Poetry Magazine, Button Poetry, Seven Scribes, and many other outlets, and anthologized in The BreakBeat Poets and The BreakBeat Poets Vol. 2: Black Girl Magic. She is a contributor to Black Nerd Problems, a Pink Door Retreat Fellow, and a 2015 Rona Jaffe Writers Award Recipient.
Release: 9/4/18
Get the Book: (Kindle), (Hardcover), (Paperback)