The Blood of Emmett Till by:Timothy B. Tyson
The event that launched the civil rights movement—the 1955 lynching of young Emmett Till—now reexamined by an award-winning author with access to never-before-heard accounts from those involved as well as recently recovered court transcripts from the trial.

In 1955, a fourteen-year-old black boy named Emmett Till, who had come down from Chicago to visit relatives in Mississippi, was murdered by a group of white men. He had gone into a small country store a few days earlier and made flirtatious remarks to a white woman, twenty-one-year-old Carolyn Bryant; Bryant’s husband and brother-in-law were two of Till’s attackers. They were never convicted, but Till’s lynching became one of the most notorious hate crimes in American history. It set off a wave of protests across the country, helped the NAACP gain thousands of members, and inspired famous activists like Rosa Parks to stand up and fight for equal rights for the first time.

Part detective story, part political history, Timothy Tyson’s The Blood of Emmett Till revises the history of the Till case, not only changing the specifics that we thought we knew, but showing how the murder ignited the modern civil rights movement. Tyson uses a wide range of new sources, including the only interview ever given by Carolyn Bryant; the transcript of the murder trial, missing since 1955 and only recovered in 2005; and a recent FBI report on the case. In a time where discussions of race are once again coming to the fore, The Blood of Emmett Till redefines a crucial moment in civil rights history.
Release: 2/7/17
Click to purchase: (Kindle) or (Hardcover)

Tiffanie has lived a sheltered life in a very strict household with her pastor-grandfather and grandmother in Washington, DC. But when she meets Damon King, she falls for the successful entertainment business man despite his history as a drug dealer. Everyone sees nothing but the brightest future for the couple—but there’s one person who wants to destroy them.

Trey Johnson is Damon’s childhood best friend with whom he built quite a successful drug business. But when the game got hot and Damon decided to leave, Trey stayed and continued to sell drugs, until he was arrested and spent seven years in prison.

But now he’s out and able to attend the wedding. While Damon is thrilled to have Trey back and hopes to bring his best friend into his business, Trey has other plans. He blames Damon for his demise and plans to ruin him, even if that means bringing Tiffanie down as well.

Trey is sure he will succeed, but he doesn’t know that there will be deadly consequences. And at the end, there will only be one man standing…
Release: 2/7/17
Click to purchase: (Kindle) or (Paperback)

When It All Comes Together: How God Can Redeem Your Brokenness for His Glory by:Riva Tims
Be encouraged to find hope in the midst of crisis by understanding how God uses our difficulties for our good.

Riva Tims and her late ex-husband, Zachery Tims, were the pastors of a megachurch in Central Florida until news of his infidelity surfaced. After the couple’s public divorce, Zachery lost his battle with drug addiction. Riva has overcome the betrayal, heartbreak, grief, and loss while holding on to her faith in God.

In a moving sequel to the story she shared in When It All Falls Apart, Tims’s powerful new book helps you learn to positively identify defining moments in your life—which often surface during difficult circumstances—and see how God is meticulously at work through all you experience. Tims’s life exemplifies the truth that God gives a double anointing to those who stand in faith through tribulation.
Release: 2/7/17
Click to purchase: (Kindle) or (Paperback) 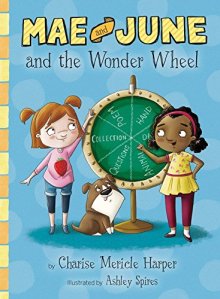 Mae and June and the Wonder Wheel by:Charise Mericle Harper
In this chapter book for young readers, June is thrilled to get a new neighbor: Mae! Soon the two of them are best friends and are having adventures determined by the Wonder Wheel that they spin each morning. Whether it’s pretending to be a dog for a day or collecting things that are blue, the girls never know what each day will bring. Also, June has a secret: her dog Sammy can talk, but only she can hear him. Will her new best friend believe her if she tells her?
Release: 2/7/17
Click to purchase: (Kindle) or (Hardcover)

Once There Were Giants: The Golden Age of Heavyweight Boxing by:Jerry Izenberg
A celebration and memorial of the greatest era of heavyweight fighters from 1962 to 1997, as witnessed ringside by a sportswriter.

Once upon a time, of all the memories made in ballparks and arenas from California to New York, there was nothing to rival that magic moment that could grab a heavyweight fight crowd by its collective jugular vein and trigger a tsunami of raw emotion before a single punch had even been thrown.

That’s the way it was when the heavyweight giants danced in the boxing ring during the golden eras of the greats Ali, Frazier, Holmes, and Spinks, to name a few. There will never again be a heavyweight cycle like the one that began when Sonny Liston stopped Floyd Patterson and ended when Mike Tyson bit a slice out of Evander Holyfield’s ear; when no ersatz drama, smoke, mirrors, and noise followed a fighter’s entry into the ring; when the crowds knew that these men were not actors on a stage but rather giants in a ring with a single purpose—to fight other giants.

By the ringside, acclaimed sportswriter Jerry Izenberg watched history as it was being made during those legendary days, witnessing fights like the Thrilla in Manila and the Rumble in the Jungle and preserving them in punchy yet tremendous prose. Delivering both his eyewitness accounts and revelatory back stories of this greatest era of heavyweight boxing, Izenberg invites readers to a place of recollection.

Once There Were Giants is his memorial to this extraordinary time, the likes of which we shall never see again.
Release: 2/7/17
Click to purchase: (Kindle) or (Hardcover)

Hairlooms by:Michele Tapp Roseman
Words have power, and those that Black women often use to describe their hair are derogatory: nappy, steel wool, out of control. They often personally inherit these terms and pass them along without even realizing the self-esteem-crushing trunk of ill will that they will carry along as they shun the person they see in the mirror. While many books on the market address the practical ways of styling Afro-textured hair naturally, Hairlooms asks: Why is it so difficult for Black women to embrace their hair? and How can Black women overcome the multi-layered challenge of embracing their natural hair and beauty? Author Michele Tapp Roseman helps readers answer these questions for themselves, to write a new story that they can pass along.

A recent Huffington Post article “Natural Hair Becoming Even More Popular Among Black Women” revealed a marked increase in the number of Black women who do not chemically treat their hair, yet also struggle to accept their natural hair and beauty. Through personal, revealing stories Hairlooms examines the issues behind these struggles. Guided exercises throughout help readers “comb through” their self-perceptions and form a plan for self-acceptance and personal empowerment.

Hairlooms includes 32 compelling personal stories about those who have embraced their God-given hair and beauty, including:

Dance of The Jakaranda by:Peter Kimani
Set in the shadow of Kenya’s independence from Great Britain, Dance of the Jakaranda reimagines the rise and fall of colonialism, and the special circumstances that brought black, brown, and white men together to lay the railroad that heralded the birth of the nation.

The novel traces the lives and loves of three men: preacher Richard Turnbull, the colonial administrator Ian McDonald, and Indian technician Babu Salim, whose lives intersect when they are implicated in the controversial birth of a child. Years later, when Babu’s grandson, Rajan–who ekes out a living by singing Babu’s epic tales of the railway’s construction–accidentally kisses a mysterious stranger in a dark nightclub, the encounter provides the spark to illuminate the three men’s shared, murky past.

Dance of the Jakaranda could well be a story of globalization–not just for its riveting multi-racial, multi-cultural cast–but also due to its diverse literary allusions: from Chekhovian comedy to Kafkasque caricatures, or magical realism popularized by Gabriel Garcia Marquez. Yet, the novel is firmly anchored in the African storytelling tradition, its language a dreamy, exalted and earthy mix that creates new thresholds of identity, providing a fresh metaphor for race in contemporary Africa.
Release: 2/7/17
Click to purchase: (Kindle) or  (Paperback) 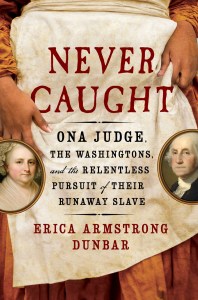 Never Caught by:Erica Armstrong Dunbar
A startling and eye-opening look into America’s first family, Never Caught is the powerful narrative of Ona Judge, George and Martha Washington’s runaway slave who risked it all to escape the nation’s capital and reach freedom.

When George Washington was elected president, he reluctantly left behind his beloved Mount Vernon to serve in Philadelphia, the temporary seat of the nation’s capital. In setting up his household, he took Tobias Lear, his celebrated secretary, and eight slaves, including Ona Judge, about which little has been written. As he grew accustomed to Northern ways, there was one change he couldn’t get his arms around: Pennsylvania law required enslaved people be set free after six months of residency in the state. Rather than comply, Washington decided to circumvent the law. Every six months he sent the slaves back down south, just as the clock was about to expire.

Though Ona Judge lived a life of relative comfort, the few pleasantries she was afforded were nothing compared to freedom, a glimpse of which she encountered firsthand in Philadelphia. So, when the opportunity presented itself one cold spring day in Philadelphia, Judge left everything she knew to escape to New England. Yet freedom would not come without its costs.

At just 22 years old, Ona became the subject of an intense manhunt led by George Washington, who used his political and personal contacts to recapture his property.