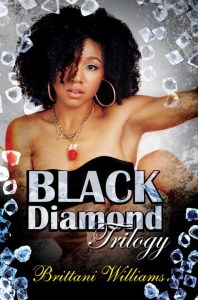 The Black Diamond Trilogy by:Brittani Williams
Jealousy and greed create plenty of drama for Diamond. Even when she thinks she’s on her way to a happily-ever-after ending, she finds herself fighting against foes she never saw coming. Will her “I rule the world” disposition keep her on top, or will Diamond lose the things she cares about the most?

Diamond and Mica have been best friends since grade school, and have always watched each other’s backs. After Mica moves out of their drug-infested neighborhood, they have a scandalous falling out and lose touch. It isn’t until Diamond hooks up with one of North Philly’s most notorious drug dealers that she’s able to leave the place that she’s always called home.

Under extreme circumstances, Mica and Diamond meet up and are back on the map as the Laverne and Shirley of the ghetto, but unfortunately, both friends have ulterior motives for rekindling their friendship. The two plot to get rid of the dealer and hit the road with his fortune, but one of them has her own sinister plan that could leave the other staring death in the eye.
Release: 12/26/17
Click to purchase: (Kindle),  (Paperback), (Audio CD)

The Carter Boys: A Carter Boys Novel by:Desirée
Sex, love, drugs, and music are just a few of the Carter boys’ daily dealings. Drama follows them everywhere, especially being the largest, most dangerous organization the city of Atlanta has ever seen. The women who want to be with them and the men who want to be just like them can easily get lost in the shuffle when the target is constantly moving to a new Carter’s back.

So, what happens when a slick-mouth girl from Brooklyn decides to go off to college in the unofficial capital of the South? She is quickly introduced to the Atlanta lifestyle, where “Bruh” is part of every other sentence; dreaded ’fros are a must; hot lemon pepper wings are law; west side accents are always thicker; nobody says ATL unless they’re from out of town; HBCU life is unlike any other; and most importantly, it’s all about family. In particular, it’s all about the Carter family. Without the Carters, there is no Atlanta.
Release: 12/26/17
Click to purchase: (Paperback), (Mass Market Paperback), (Kindle)

Testify by:Ms. Michel Moore
Clay has never depended on anyone but himself. Having been to prison twice, the veteran criminal feels he has nothing left to lose. He rules his small territory of the Detroit drug scene with an iron fist, acting as the police, the judge, and the jury. Clay is without remorse. Anyone who crosses him or jeopardizes his freedom will be dealt with, and justice will be swift.

Clay has always been cursed with a short-fuse temper, but this time it causes him to make a mistake that could bring him down for good. Feeling betrayed, he explodes, committing cold-blooded murder on a crowded city block. In an ironic twist, he leaves seven eyewitnesses alive. They were always forced to live by his strict street code commandments, but now they will be the ones to testify. Ultimately, Clay’s fate is in their hands.
Release: 12/26/17
Click to purchase: (Kindle) or (Paperback)

Trapped Between Heaven and Hell by:M. Skye
A host of unexpected events lead to the revelation of dark secrets between Tyree’s and Mia’s families. With murder, corruption, and duplicity standing in their way, can Tyree keep his family safe and rekindle a love he once thought was lost forever?

After the kidnapping of his son, Tyree Johnston’s marriage to Mia, the love of his life, fell apart. Now, two years later, Tyree has their son Kyan for the summer, and he is unprepared for Mia’s return to their hometown. Trying to move forward with his life, Tyree finds himself stuck between what his heart wants and what his head says is right.

Mia left for Paris the minute her divorce was final, but when her sister-in-law tells her that Kyan needs her, Mia is on the first flight out. Besides, it’s about time she faced Tyree so they can try to come together as co-parents for their son’s well-being.
Release: 12/26/17
Click to purchase: (Kindle), (Paperback), (Mass Market Paperback) 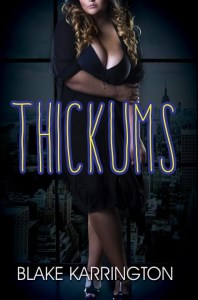 Thickums by:Blake Karrington
Best friends Nora, Darleen, and Andrea have one thing in common: they hustle by any means necessary. Money is never a problem for these sexy, big and beautiful women, and neither is getting a man.

Darleen doesn’t really like her current occupation, but she loves the money she makes from doing it. What happens when an out-of-work Darleen devises a plan to rob her former boss? Can she manage to push a different kind of weight, or will she need to call in reinforcements?

Nora loves her job at the hospital and takes her position very seriously. After she is fired for not reporting an incident involving her fellow co-worker, will she dust off the Want Ads and look for a new employer or will she team up with her two best friends, along with a sexy corner boy named Bugsy, and flood the city with a different kind of prescription?

Bad Behavior by:Kiki Swinson, Noire
NINE LIVES
KIKI SWINSON
Wild-card Aiden. Dead-shot Ava. Efficient, fast, and brutal, this notorious brother-sister hit team grew up abused, unwanted—and in lethal tune with each other. Killing nine targets in ten days will be their biggest score yet. But as Ava sets up their final target, she falls hard for him and a chance at a normal life. And that’s a betrayal she may not live to regret…

THE CRUSHED ICE CLIQUE
NOIRE
At first all ghetto princesses Honore and Cucci want is quick cash-flow. But after sexing jewelry distributor Slimy Sam and learning his illegal tricks of the trade, they assemble a crack team of thieves for one dazzling scam. Replacing diamonds with fakes and selling the reshaped real deal on the black market is making them crazy-rich. But when Sam double-crosses them, these diamond divas must survive to steal another day…
Release: 12/26/17
Click to purchase: (Kindle) or (Paperback) 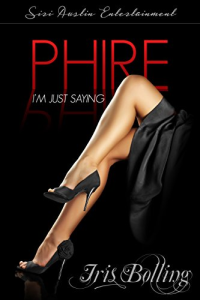 Phire: I’m Just Saying (Gems & Gents Book 8) by:Iris Bolling
Growing up in a family of overachievers isn’t easy for feisty co-ed, Sapphire Lassiter. With eleven older brothers and sisters, they all have opinions on what she should do with her life. Phire, as everyone called her, of course, has other plans.

No one promised you rainbows and sunshine. Lawrence Trent Palmer never forgot those words for they molded his life. LT, as he prefers to be called, became a multi-millionaire before the age of thirty. This granted him the means to accomplish his life’s mission: Vengeance.

He had a plan until, a fight, a dance and a woman changed it all.

After pulling Phire from a confrontation during a political event, captured on camera, LT is warned to stay away by her larger than life brothers. The feel and vision of her in his arms would not allow him to just let go. Feisty, opinionated, and unforgettable, Phire had his mind on marriage, family and a different kind of future.

With Phire at his side LT’s plan for vengeance is off, until the past stokes the flame and threatens the life of the woman he would kill—even family—to have—I’m Just Saying.
Release: 12/25/17
Click to purchase: (Kindle) 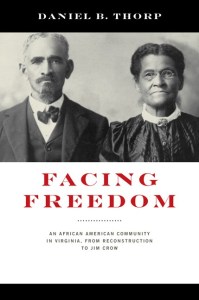 Facing Freedom by:Daniel B. Thorp
The history of African Americans in southern Appalachia after the Civil War has largely escaped the attention of scholars of both African Americans and the region. In Facing Freedom, Daniel Thorp relates the complex experience of an African American community in southern Appalachia as it negotiated a radically new world in the four decades following the Civil War. Drawing on extensive research in private collections as well as local, state, and federal records, Thorp narrates in intimate detail the experiences of black Appalachians as they struggled to establish autonomous families, improve their economic standing, operate black schools within a white-controlled school system, form independent black churches, and exercise expanded―if contested―roles as citizens and members of the body politic. Black out-migration increased markedly near the close of the nineteenth century, but the generation that transitioned from slavery to freedom in Montgomery County established the community institutions that would survive disenfranchisement and Jim Crow. Facing Freedom reveals the stories and strategies of those who pioneered these resilient bulwarks against the rising tide of racism.
Release: 12/25/17
Click to purchase: (Kindle) or (Hardcover)

Unlawful Desires (Lawyers in Lust Book 1) by:Sassy Sinclair
Sparks fly when a handsome lawyer falls hard for a smart, seductive woman who thinks like a man and acts like one too.

Sharla Ratliff is done with having her heart broken. Her new dating rules are simple. No emotion. No expectation of commitment. Sex purely for her own physical enjoyment. Then she meets Marcel Dennard. The attractive lawyer has all the trappings of success: a thriving career, women at his beck and call, and enough money in the bank for the finer things in life.

While Christmas is the most wonderful time of the year for most, Addison Ross is haunted by the tragic events of Christmas past. The losses she suffered and pain she endured, damaged the bond she had with her family and hardened her heart. Addison vowed to never return home, but after four years away, she journeys back to North Carolina to deal with what drove her away and grapple with shocking revelations that changes everything she knew about her life.
Release: 12/25/17
Click to purchase: (Kindle)